The Flat begins with film maker Arnon Golfinger in an apartment. It’s the Tel Aviv home of his recently deceased grandmother. She had passed away at the age of 98. Now the family is coming over to begin to dig through her belongs to see what is going to be kept and what is going to be tossed.

At first I wasn’t too thrilled with watching what seemed to be a bit more than a home movie, at least at this point. Frankly if I had stumbled into the film on TV or DVD I would have hit the fast forward or turned the station. However, I was in a theater so that wasn’t an option. Also all of the promotional material talked about a family secret so I hung in and waited (I also saw that this was very highly rated at IMDB).

It wasn’t long before the film went from merely okay to truly compelling.

At this point I’m going to talk about the secret, which is revealed early in the film. If you don’t want to know, stop reading and just get a ticket for the film. Its a great film and you should see it. If you don’t care, and there is no reason that it needs to be a surprise, buy a ticket and keep reading.

Still with me? Good.

It’s a discovery that starts a search that takes Goldfinger across Israel and back to Germany, which was the place his grandmother always felt most at home. It’s a search that forces us to ponder who are our parents (or grandparents)? How do we view family history (or even our collective history)? How do we face tragedy? How do we deal with our friends, especially when there is darkness in their past? What happens when people tell us things we don’t really want to know?

There’s more and it’s a heady mix that keeps you watching because you want see how it all comes out…and because invariably you’ll see echoes to your own life (though not on such a huge scale).

This is a haunting film. It’s one of those rare films that I wanted to start again the second it ended because I wanted to see everything at the start knowing where it all ends up. It’s a film that has really stayed with me, to the point that I have many many questions I want to ask of Goldfinger, not the least of which is what does Edda (daughter of her grandparents friends) think of the film. 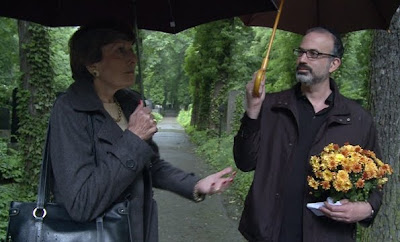