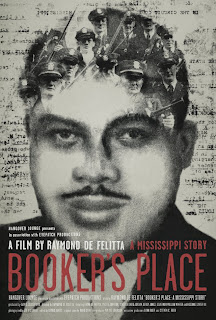 In 1966 Frank De Felitta made a film about the people of Greenwood Mississippi and how the blacks and the whites saw each other. The center piece of the film was Booker Wright, a waiter in a white only establishment who spoke to De Felitta and who talked about being a waiter and how he was treated. It was an interview that changed Booker's life forever. Decades later Raymond De Felitta, the son of Frank hooked up with Yvette Johnson, the granddaughter of Booker, to look at his life and how his appearance on TV forever changed their community.

Moving documentary is a wake up call and reminder of the bad old days. Its a film that reminds us just how bad things really were. It then points out how we still need to work on things. It's also a film about how one man really can change to world, or at least his community.

I was moved. Here was this guy who was not an accidental activist as his grand daughter had thought, rather he was a man who one day decided that he had to say something, even though he knew there was going to be a price to pay.

Shot in a beautiful black and white the past and present merge together making us wonder how far we've really come.

If there is any flaw in the film its that some time in the final half hour, after Booker had made his appearance n TV and things turned difficult, the film kind of loses it's way. In its final minutes it doesn't seem to know which way to go. Its not fatal, it just keeps a very good film from being truly great.

(This is getting a theatrical and VOD releases and will be the subject of an NBC News story in May.)
Posted by Steve Kopian at April 23, 2012