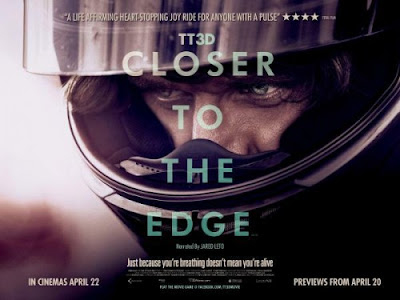 This is an appreciation of the Island of Man TT road race. Held every year over a two week period it attracts the best motorcucle riders in the world who pit themselves against a grueling course that pushes both man and machine to the limit. Focusing on the 2010 races and on Guy Martin in particular this is great look at the race and the people who feel they must race, even in light of horrific crashes that often result in death (two people are shown to have died during the course of the events covered in the film)

This film was originally released to theaters in 3D. The release here in the States was a token one, with it only playing a few select theaters, but I know from what I read it played quite extensively in the UK where it made some noise. I saw this on import DVD butI wish I had had the chance to see this on the big screen because the film’s racing sequences are absolutely amazing. Other than an early sequence which was probably shot with a helmet camera (and thus has a weird angle), all of the racing and driving sequences are the sort of thing that would probably have been a blast really big. Even watching at home on the 42 inch screen you got the sensation of flying down the road at 150mph.

For the most part the film is a great look at a century old event that keeps the riders coming back again and again. Yes its dangerous, yes there are crashes that hurt and kill people, but there is something about the adrenaline rush for everyone involved, the riders, their crews and the race officials, that keeps people going back again and again. Seeing the film you get a wonderful understanding of why people do it. You also see the beauty of the race and of the Isle of Man.

Be warned while there is some talk about the history of the race, especially in connection with those that race now and recently, this isn’t a history. Its simply an appreciation. Its people talking about the thing they love most in the world.

For the most part this is an absolutely fantastic film..

The problem for me is that the film is very much focused on Guy Martin, a mechanic whose passion is racing. Martin is one of the best racers there is and watching him race is a thing of beauty. The problem is that Martin talks and talks…and talks…and talks and talks. Which is fine, but what he’s talking about is all over the place, about racing and life and other things. Its too much. Talk to me about racing and not he other stuff, and not as endlessly as he does. You could probably cut about 10 or fifteen minutes of his babble out and not hurt the film. The other problem with focusing mostly Martin is that as things happen on the Isle of Man during the races the film feels like its constantly in the wrong place at the wrong time. I know why it’s happening, and it’s understandable, but at the same time I kept wanting to know more about things we weren’t seeing.

Flaws aside, this is a great film that anyone with any interest in motor sports of any sort should see since it will knock your socks off. 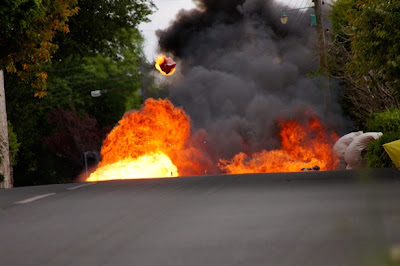