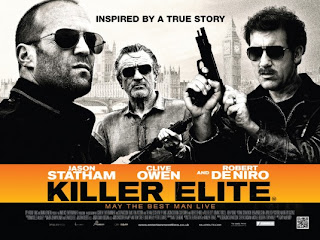 Allegedly based on true events (well the film is based on a novel supposedly based on true events) this is the story of a hit man (Jason Statham) who is forced to take a job locating and killing the men who were supposed to have killed the son of a shiek. Statham has to take the job in order to win the freedom of his friend and mentor (Robert DeNiro). They are hunted by an ex-SAS man (Clive Owen) working for a secret organization who fear the assassinations will expose their unsavory deals.

I really like the film. To be certain I was a bit thrown off by the amount of talk, but for the most part I thought this was a great little thriller with the right amount of action, smarmy lines and tension. At no point was I confused by what was going on (it's all there and unless you fall asleep of go to the bathroom you can't miss anything).

I need to point out that if you've only seen clips on TV or the trailer you haven't really seen anything from the film. Sequences in clips that were`used in reviews and in trailers are not how things are in the film. The Chair sequence is not what you think it is.

Do yourself a favor get some popcorn and a copy of this film and sit back and enjoy.
Posted by Steve Kopian at April 05, 2012