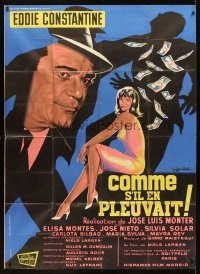 Being included here because I want to bring Eddie Constantine to a wider audience, As If it Were Raining is in actuality the weakest film I've seen Constantine star in. The problem isn't Eddie, nor even the script, rather its the editorial choices which make things seem jumbled.

The plot has Eddie playing Eddie Ross helping out a young woman in trouble. This brings him to the attention of a shadowy figure who gives him a job. Eddie's relationship with his boss is both hot and cold as Eddie is forced to occasionally defend himself from attacks. Eddie wants to know who this guy is, and the boss wants to use Eddie for his own ends. I

Its an intriguing story, unfortunately it never quite works. The problem is that some events are cross cut oddly. Watching the film I felt like the editing was done with a food processor.  The fact that it never quite works is a shame since Eddie is a more serious tough guy than in many other films. Yea it has a comedic edge (the chimp and the witty exchanges) but there is a seriousness that some of the breezier Lemmy caution films lack.

Constantine frequently was better than his material. You could in theory just point a camera t him and his force of personality would do the rest, however watching this film sometimes that wasn't enough sometimes forces or editors and directors worked against him and destroyed what could of been one of his best films.

For Constantine fans only
Posted by Steve Kopian at October 13, 2014

Email ThisBlogThis!Share to TwitterShare to FacebookShare to Pinterest
Labels: ambivalent post, crime, drama, eddie constantine, not worth the effort