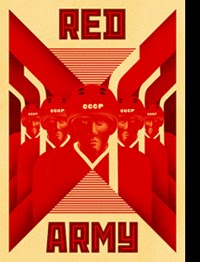 Red Army, like the best in its genre of sports documentaries, illuminates the beauty of and love for the game through its entertaining history. This effective documentary brings a great joy and energy to its history of "Red Army," the astonishingly powerful championship five-man ice hockey squad of the Soviet Russian army (who later became the members of the Stanley Cup-winning Detroit Redwings), led by defenseman Viacheslav "Slava" Fetisov, who is extensively interviewed (along with his comrades and contemporaries) in discussions both funny and poignant, tracing the rise of the Red Army team paralleled by the Cold War's chilliest days and its eventual thaw in the age of glasnost. 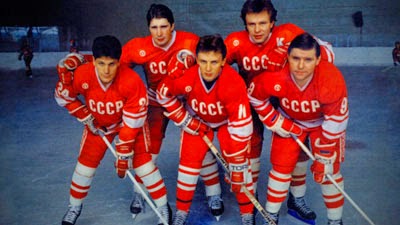 The grimness of Soviet life is touched upon but doesn't color the film's attitude; it beats an extremely humorous tone straight from the first frame (Ronald Reagan pontificating on the evils of communism). Visually compelling, it juxtaposes graphics and film of Russia and sports new footage against bold and occasionally irreverent graphics (a Russian patriotic song is accompanied by a bouncing hammer-and-sickle to sing along). The sure star of the documentary is Slava Fetisov, speaking frankly and touchingly but also flipping the interviewer the bird or grinning smugly as he recalls the Soviet ice hockey squad beating Canada in all five games of a pioneering international series. Slava's compatriots and living teammates are interviewed, plus American coaches who later worked with him and the team, and even an ex-KGB agent assigned to watch over the Red Army squad (humorously interviewed as his granddaughter blithely plays in the park around him) fill out the history, but the film without hesitation belongs to Fetisov. Whether in period footage or recent interviews, he's compellingly magnetic, powerful in both body and spirit. 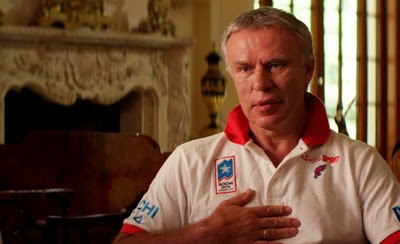 Economically, entertainingly directed by Gabe Polsky, Red Army is a solid education inside its 85 minutes, especially of the iron-chained connection between military and sports inside the then-Soviet Union. This is not a world of free agents but a time and place of political servitude to the state — Russia's hockey players were groomed from childhood through a school run by the Russian military. Powered by intense drive and ambition, fueled by national patriotism, the Red Army squad developed amazing tactics of team play that made them operate like clockwork on the ice. Hockey was run on the spirit of cooperation for success that fueled Soviet belief since the first days of Lenin. Add the ruthless, authoritative coach, Viktor Tikhonov, hated by his players but driven to heights of success, and Red Army illustrates definitively how such a powerhouse quintet of players could have only been forged by the Soviet system.

Not that there's no setbacks, of course: the "Miracle on Ice," in which an underdog American team defeated the Red Army Five 1980 Winter Olympics, takes place less than half an hour into this film and is shown to be the catalyst Tikhonov uses to pound the hammer (and sickle) down on his players even more brutally — the reminiscences of the squad's eleven-month away-from-home training regime and their every step surveyed by the KGB bring a bittersweet tinge to the days of their success. Tikhonov's dictatorship and power, however, leads to player's urge to defect, especially after seeing the phenomenally richer and more open West during international tournament tours where they're shown off like trained bears. Even later trades to America or Canada were heavily controlled by the Soviet system, demanding outrageous percentages (90%) of a departing player's salary and utilizing intimidation, blackmail, and fear tactics to dissuade a move to the West. 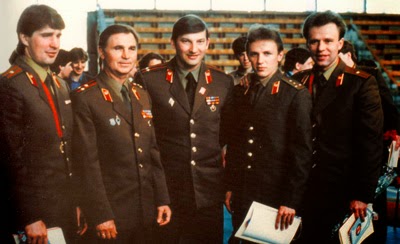 Red Army's skillful editing makes old 1970s sports footage look artful, and the explanations and illuminations of hockey tactics and techniques are clear and suitably deciphered for the sports novice. This history of the greatest five man ice hockey unit of all time achieves a rare hat trick in documentary film: it's an incisive and thorough history of a little-known part of modern history. It's capably directed, edited, paced and is simply beautiful — the '70s sports commentators may look dated but the film's portrayal of the game makes hockey timeless. Most of all, it well-earns the clever twist that turns its spectators all into cheerleaders and supporters of the Soviet Russia team. Come for the footage of ice-skating, hockey-playing trained bears, but what you'll take home will be the realization that the true Miracle on Ice was the fall of the Iron Curtain, the opening of the East and West barriers, and our chance to see — and cheer — the greatest team on ice.

Red Army is featured at the New York Film Festival 2014, and opens nationally in the US in January 2015.