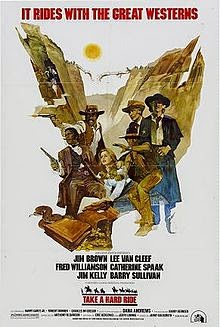 Take a Hard Ride had me when I saw that it starred Jim Brown, Fred Williamson and Lee Van Cleef. What thrilled me even more was the discovery that the film was chock full of great character actors including Jim Kelly as a half breed native American martial arts master.

Yea the film is a great deal of fun.

The plot of the film has ex-con brown agreeing to take the payroll to the ranch of his dying boss. It’s a long trip and 86,000 dollars back at the end of the 19th century is a lot of money. Instantly everyone is out to bushwhack brown, and Van Cleef wants him for the bounty on his head. Needing help Brown ends up tied to fred Williamson, a gambler who wants the money but will only promise to remain loyal until Mexico. As bad guys give chase the good guys battle each other as well.

Looking like an American western despite being very much a spaghetti western- the film was shot in Spain and has the signs of post production audio work. There is a maturity and a dark edge that is  unexpected in "American" Westerns (I'd love to tell you about a couple of twists but I don't want to ruin them), the good guys are a lighter shade of grey than the bad guys and even so some of the bad guys are rather black.

The film works for two reasons. First the action is amazing. The shoot outs are spectacular. As I implied earlier things don't go the way one expects, people die unexpectedly and how things play out is rarely what would come to mind.

The second reason is the great cast of characters. Jim Brown's lead is the moral center and because he's such a straight arrow it allows the film to be grounded so that we accept his battles with gambler Williamson, or some of the strange characters that are in orbit around him, such as Jim Kelly's mute half breed kung fu expert. No it makes no sense but it is a great deal of fun.

I really liked this film a great deal. Highly recommended.
Posted by Steve Kopian at October 22, 2014