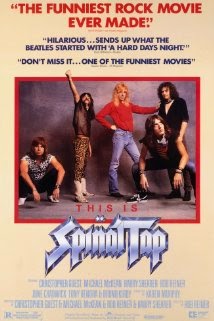 The New York Film Festival is doing a special screening of This is Spinal Tap. I saw Spinal Tap in a theater in Plainview on Long Island that has now been converted into a Shop Rite supermarket. The film was funny but the sound was god awful with a high pitched whine coming out of the right speaker through the whole film. The management refused to fix it nor to give a refund so it was like it or lump it .

The film about a bunch of moronic heavy metal rockers was incredibly influential. Not only did it kick the mockumentary genre into existence, it really brought the film the actors involved Michael McKean, Harry Shearer, Christopher Guest to prominence and it gave director Rob Reiner an auteur status that he’s never been able to shake (and yes I mean that as a knock, he’s not that good a director despite having a couple of classics in his pocket)

I like the film a great deal but to be perfectly honest I’ve always liked the outtakes better. Years ago Criterion put out a laser disc that had so many outtakes they ran longer than the released film. They were/are hysterical. For whatever reason the film’s classic status has always eluded me. It has moments but it’s not great (on the other hand if you’ve seen the film and love it I’m talking out of my hat)

The reason to see it at the Festival is because there is going to be a talk after the film. I believe Rob Reiner and several of the actors are going to be there to introduce the film and do a post screening Q&A. I would love to see the Q&A but since the screening is at 9 on a work night I can’t justify going to see the film again for the post film talk.

If you’ve never seen the film I recommend trying to score some tickets to see it on the big screen. If you have seen it before I suggest you try to score some tickets because based on the past track record of post film talks the discussion should be a blast and a half and even better than the film.
Posted by Steve Kopian at October 07, 2014