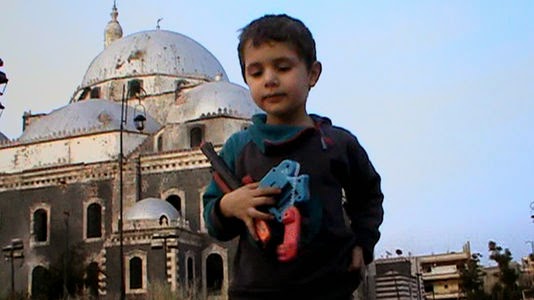 Stunning, in the real sense of the word, film on the Syrian uprising is a poke in the eye, punch in in the gut, kick to the balls or a brick to the brain. Its a deeply visceral film that is profoundly affecting.

Its a masterpiece. One of the truly great films that I've seen in 2014 and I hope to god never to see it again.

I don't mean that in a bad way, I mean it simply that the film is so affecting that I don't want to go back to that head space. The thought of the people living through what the film shows is crippling. The insanity has to be stopped...

The film is made up of  footage from the conflict in Syria taken from all sides (we see protesters protesting and soldiers abusing the shit out of those they've captured), put together with narration from Ossama Mohammed, one of the directors who talks about being in exile and watching events unfold in his home  country. The narration is framed as a look at his life and memories. the result is kind of impressionistic and almost experimental. It makes the film something grandly more than just a record of the protests and the violence. For the first time in the recent spate of films concerning events coming out of the Arab Spring I felt I was there in the streets living and dying with the nameless people on screen.

Watching the film I quickly stopped taking notes. What would be the point? To list the cruelties? I certainly couldn't really explain what I was feeling since to try and record them would cause me to break away from the film and stop feeling. I just watched and stared and had my eyes glaze over... and had my heart break.

I really don't have the words to describe the power of this film.  I've been trying to work this piece out over the several days between when I saw the film and when I finished this piece and find that I could write a couple of lines and I'd then walk away. I could never sit down and just write the piece in one grand go.  The problem is that if I sat down and wrote the film up, if I did a "proper" review what you would get is an intellectual piece about how this is a real found footage film,  how it's a propaganda piece and a discussion of what the filmmakers are doing on an intellectual level. The trouble is that as intellectual as you want to be, and as meaningful as I might try to be the ultimate power of the film is emotional. These things are happening. People are dying. Something has to be done. I have no answers, only the desire to try and do something. As hard as you may try to distance yourself from the events in the film by making them an intellectual exercise, the film ultimately is a pained cry for the people of Syria

If you think you can deal with the pure raw emotion of a country at war with itself in all its savagery then see Silvered Water.