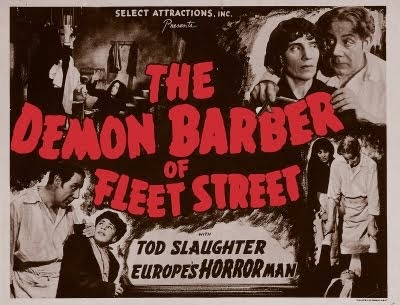 Slaughter’s film is not the Stephen Sondheim version. While they both take their genesis in the same literary character who may have a basis as a real life rogue, Slaughter’s film strips the story down to barebones. Slaughter is Todd, the demon barber, who plies his trade for purely mercenary reasons. He takes his rich clients for all they are worth before taking their lives. His neighbor Mrs Lovett uses the bodies for her meat pies. Things are going along swimmingly until Todd falls for a young woman with a lover at sea. Despite his best effort to win her heart she will not warm to his charms and when said lover returns things go south real fast.

Somewhere between his more reserved early performances and his later scene chewing ones, Tod Slaughters Sweeney Todd is probably the quintessential Slaughter performance. It has him both as the great smooth talker who woos his clients, and the crazed mad man driven by lust and desire. There is a reason that when you mention Slaughter’s name this film springs to mind, even among Slaughter fans and that is this is the film where Slaughter gets his on screen performance exactly right. He manages to get across the tightrope of his performance perfectly. It’s one of those performances that sears itself into your memory and kind of obliterates all the other stabs at the role.

The film as a whole is good one. While probably not the best Slaughter film quality wise, there is something about it that makes it the cinematic equivalent of comfort food. While in some ways I like other of his films better, this is the one that I keep returning to. “I feel like Slaughter tonight…where’s Demon Barber…” This film is an old friend.

If you’ve never seen a Slaughter film and are unsure of some of the others, go for this one. If you’ve tried and disliked his other films but not seen this one, dive in. And If you’ve seen it, do yourself a favor and see it again…though if you want to see it under the best conditions do so on a dark and stormy night with all the lights out.
Posted by Steve Kopian at October 31, 2014