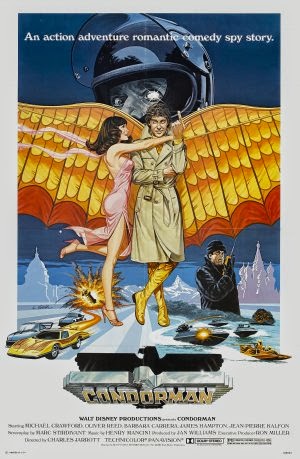 Long before Michael Crawford became the original Phantom in Andrew Lloyd Weber’s musical, and before his ego was popped by his tampering with Dance of the Vampires, he bounced around in light family films. One of these is the Disney film Condorman which was based on a novel by Robert Sheckley.

The plot of the film has Crawford playing a comic book artist who insists on reality. He won’t put anything in his comics that won’t actually work, to that end he is constantly building contraptions that leave him broken and bruised. Through circumstances he ends up drawn into an espionage plot and working for the CIA- who are crazy enough to fund his wild gadgets.

This is one of those clunky live action films that Disney turned out with regularity in the late 70’s and 80’s when they seemed to have all but forsaken animation. They were a mixed lot with some being classics and some being best burned and forgotten with the ashes entombed in an unmarked grave. Actually Condorman is a combination of the best and worst Disney has to offer.

The problem with the film is it’s very much a kids film. When I saw this film when it hit theaters I thought it was pretty good. I liked the silly everyman vs spies plot. I couldn’t understand why people hated the film. A few years later and a couple more miles under my belt I fell in hate with the film. Things played really stupidly and outside of the gadgets I hated it. However I saw the film again recently and while I don’t love the film, I no longer hate it.

I think that the film works not so much because of Crawford (who can be really annoying) but because of the rest of the cast, particularly the lovely Barbara Carera and Oliver Reed. They give the weight the film needs and manage to keep things grounded even when things get overly silly. Of Course the weird gadgets, from boat to folding wings are really cool, and it’s neat whenever they make an appearance.

I should point out that the film’s gadgets are proof that superhero films of the real comic book variety don’t work. Seeing the gadgets, especially ones that are made to be real world practical proves just how impractical they are. If you want to see why Wolverine doesn’t wear yellow spandex in any of the X-men movies this film will clue you in.

If you have kids of a certain age or like amusing road accident films, I’d give this film a shot. Its not great, but at the same time it’s a great thriow back to a time past.
Posted by Steve Kopian at October 23, 2014