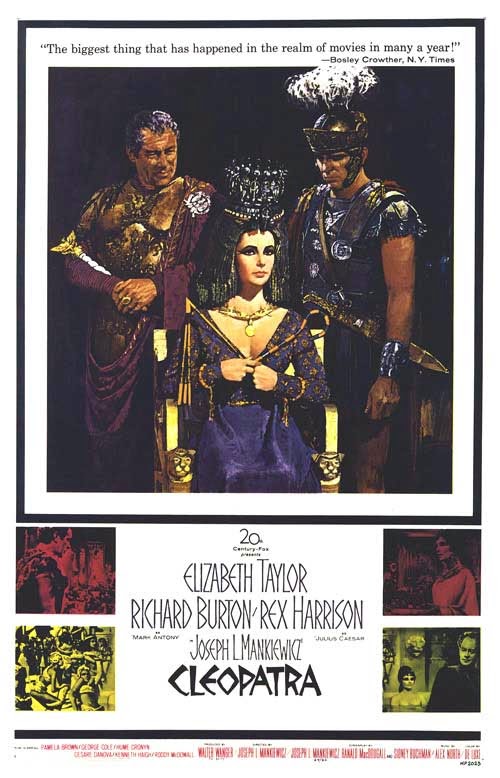 Huge bloated spectacle with Elizabeth Taylor in the title role and Richard Burton as her lover Mark Antony is being shown at the New York Film Festival because of the sidebar on director Joseph L. Mankiewicz.

The film tells the story of the doomed lovers from Antony's arrival in Egypt on to the pairs fabled end.

As eye candy the film is great, as anything else the film is painful soap opera. Every time I watch the film I find I love the first hour with Rex Harrison as Caesar, but once he leaves the film slows to a crawl of longing looks between the famous couple. It wouldn't be bad except that the film's current standard running time is over four hours which is at least two  too many.

And speaking of running times, this film has many going anywhere from 192 minutes to the current 248 to the directors cut of 320...but wait there's more. Several times before she died Elizabeth Taylor said that so much footage remains unseen that they could fashion another four hour film from it and not duplicate anything in the current film. (The horror)

If you've never seen it and you want to see an old school epic film on a big screen I'd say you might want to give it a shot. But Unless you're a huge fan of suds you may want stay close to the aisle so if the smarminess gets to you you can flee. (Personally I love the first hour, after that I tend to turn it off rather quickly)