Ming of Harlem:Twenty One Storeys in the Air (2014) 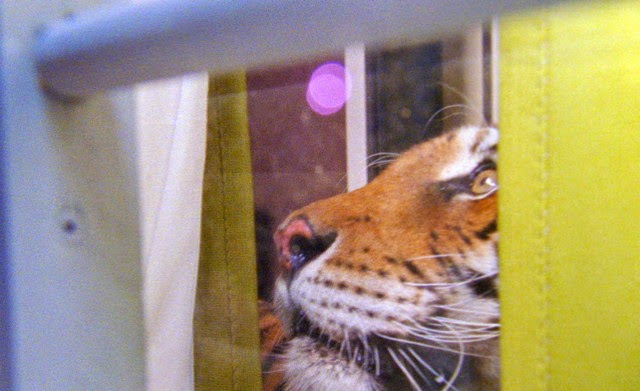 The film screening tomorrow at 5pm Ming of Harlem is best described as 15 minute movie that is an hour too long. This film had people around me snoozing, and even I had to fight falling asleep.

Nominally the story of Antoine Yates who was arrested and thrown in jail when it was discovered he was living in his Harlem apartment with a full grown tiger (Ming) and an alligator (Al). The film inter-cuts police radio transmissions and TV news accounts, with footage of Yates riding around Harlem in a car talking about what happened and footage of a tiger and alligator wandering around mock ups of the apartment where it all went down.

Actually most of the film is  animal footage over which we hear music or poetry and it gets old real fast.  Even the occasional Manhattan skyline shot doesn't help.

This is a dynamite 15 minute film but it needs to lose an hour of pretentious bullshit.

Avoid this one like the plague unless you are in need of sleep.
Posted by Steve Kopian at October 02, 2014

Email ThisBlogThis!Share to TwitterShare to FacebookShare to Pinterest
Labels: ambivalent post, documentary, not worth the effort, nyff2014