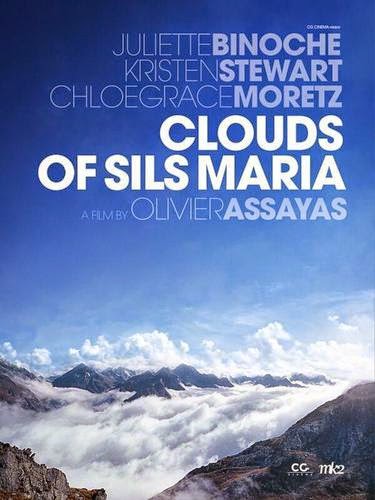 Actress Maria Enders,Juliette Binoche, is traveling to accept an award on behalf of the playwright who made her a star. When word reaches her of his death she is sent into a tizzy. Things become even more complicated when she's offered a role in the same play that made her career playing opposite a young starlet...

After three solid films that I've truly enjoyed several times (Summer Hours, Carlos and Something in the Air) Olivier Assayas is back in his usual hit and miss form with Clouds of Sils Maria. While there is little doubt that Assayas is a great director his scripts can be messy affairs with moments standing out more than the whole. I think the problem is that unless the director has a story to follow, say the life of Carlos or even his own young adulthood (Something in the Air) he wanders all over the place letting his worst instincts take over.If you need a prime example of that take a look at his Boarding Gate which has a woman in love with a big wig and the assassin hired to kill him, its a pure potboiler of the worst kind despite some meaty roles and some great sequences.

With Sils Maria Assayas has made a film that is best described as an interesting misfire. Filled with some great performances, most surprisingly Kristen Stewart who can now safely be called a real actress, and some great sequences, it also has some stilted dialog, crashing character interactions and a sequence from a supposed big budget (X-men) film that is laughably awful for the wrong reasons. Who wrote this crap? Assayas apparently since he's credited with the dialog.

The biggest problem with the dialog is that its very arch and very much about something. There is this feeling that Assayas very much wants to confront the whole getting older life moves on thing. Worse the film is constantly dropping show business references and names, but none of them feel natural. Actually most of the dialog feels artificial with only a few moments between friends seeming to play out real. This is not reality this is a construct, no one talks like this, or if they do not for the extended periods that are in the film. The result of the bad dialog is no one seems real and even the usually great Binoche seems histrionic at times. Stewart on the other hand seems fully grounded even when delivering lousy lines about TMZ.

To be fair I don't hate the film, it's good on its own undemanding level, but considering that Assayas hit it out of the box with his last three films, this is a major disappointment especially for me who had this as one of my top five muste sees at the New York Film Festival
Posted by Steve Kopian at October 05, 2014