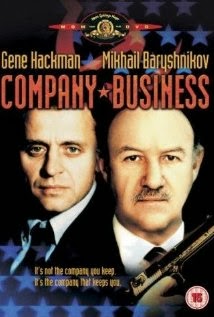 I like Gene Hackman a great deal. I find that his presence is a movie is somehow comforting. Seeing his name in the credits of a movie always means that there is going to be a at least one good thing I the film. Of course he made his fair share of stinkers, he gave up acting for a while because he found he was doing movies simply because they were throwing stupid money at him. Sure he was happy to take the money but the films that were being made were turkeys. He eventually came back to films taking roles that meant more to him beyond just a paycheck.

Far from deep and purely breezy entertainment 1991’s Company Business which I’m guessing that Hackman took either because he wanted something light or he wanted a trip to Europe (maybe both). Personally I don’t care the reason I just like the film.

The plot of the film has old school spy Hackman brought in to help with the hush hush exchange of prisoners in Berlin before the wall fell. Things go wrong when Hackman realizes that the guy coming back may not be the real prisoner since he saw the man in the airport in the US on his way over. All hell breaks loose and soon he’s adrift in Eastern Europe with his prisoner played by Mikhail Baryshnikov, who is another old school spy. What he didn’t know and soon learns was that there was a great deal of double dealing going on with moles and administrators on both sides trying to protect their asses and throw all blame Hackman’s way.

High art it’s not. Light and breezy it is. Generating some tension, the film remains largely light thanks to the wonderful interplay between the two leads as well as a great supporting cast which includes Terry O’Quinn and Kurtwood Smith. This is exactly the sort of film that I stop to watch every time I come across it because it is so much fun and so non taxing that it’s like a friendly mind wipe. It’s a film I can relax to and forget the days troubles.

For whatever reason this film has always gotten an unfair shake. I remember going with my cousins and my aunt and uncle to see it when it came out and we had to go to some oddly timed showing. This was one of those fill in dumps where it appeared for a couple of days to fill in between big budget blockbusters. With no real money behind the release no one was ever aware of it except those who stumbled on it.

This isn’t a great film, but it’s a damn fine popcorn curl up on the couch film. Its got great smart ass lines and great action sequences and lots of smiles.