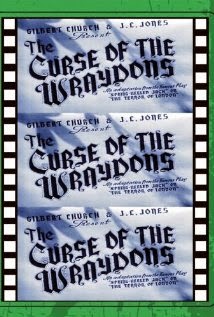 I'm a huge Tod Slaughter fan. To be certain his films are far from truly great but they are almost always fun. Sadly, even for a Slaughter fan this is a tough slog. Its not Slaughter's fault, rather it's everything else

The plot of the film is a convoluted mess having to do with the Wraydon family, cursed with insanity; a killer with an ability to leap to great heights; spies trying to get the goods on the British military, weird experiments and various romances. Almost all of it loops back to the main villain, the Chief (Slaughter)

Based on the play Spring-Heeled Jack or The Terror of London by Maurice Sandoz this is probably Tod Slaughter's most stagy and awful film with the sequences playing out as if they were tableaux or as if they were from the  early days of sound. While I understand the British film industry was hampered by the recently ended Second World War this is just point and shoot filmmaking. Its painful to watch.

Truth be told this is a really bad film. I should probably have run this during the Thanksgiving Turkey's week but I wanted to warn any of you dabbling in Tod Slaughter to stay the hell away from this turkey. Its all talk and digression and little action and forward motion.
Posted by Steve Kopian at October 28, 2014