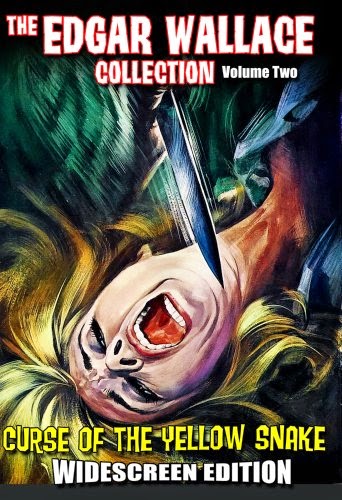 Story of a cursed jeweled snake that when has the potential to make the possessor invincible. The snake is hidden in a burial crypt in a pagoda in Hong Kong. When thieves try to steal it, killing someone in the process, the owner knows that a great evil is in the land. Sending his son to London to marry, despite his protest of wanting to stay and find the men behind the attack, the battle for the snake heats up. In London the son meets his half brother, a rich man who is half Chinese, who has designs on the snake. The battle between the brothers becomes a struggle for control of the world.

This is a yellow peril story that is more akin to a Fu Manchu story then the mysteries that are the norm in the Edgar Wallace series. Actually it isn't surprising since Wallace was the man who came up with the story for King Kong, so a tale of high adventure is right up his alley.

This is a very good little film, not just because it breaks with the conventions of the rest of series, nor just because it's a ripping yarn, but the film is unique in that while all of the characters are likable, most of them are not wholly nice. Our hero is roguish and almost rakish, his father is willful and clearly possessing a past of darkness, his brother is charming as well as villainous, the heroine is at times almost mousy, her sister a bit too self centered, and the girls' father is a shady business man who will do anything to keep himself afloat including offering up the girls. No one is spotless, except perhaps for the hero's antique loving friend. It's an interesting group of people and it makes the film have a great sense that anything can happen at any time.

More than worth a bowl of popcorn and a soda.
Posted by Steve Kopian at October 19, 2014