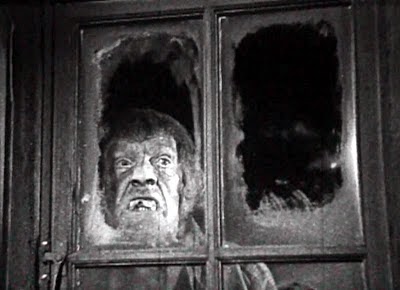 When a bank is robbed the last thing the watchman says is that there was a face at the window. The banks gold depsoits are stolen by a fiend known as the Wolf and the bank teeters on the verge of financial collapse.  Enter Chevalier Lucio del Gardo (Tod Slaughter) a rich man offering to put his gold fortune into the bank. Chevalier has eyes on the bank and on the bankers daughter. She has no eyes for him, but to the poor teller who has vowed to catch the Wolf

Hoary over done melodrama that is funny for all the wrong reason but yet manages to be completely compelling-thanks to Tod Slaughter who nods and winks and over plays it to the point you'll be booing and hissing him from your couch. That no one suspects Slaughter is ludicrous since he is is dripping with evil from the first frame.

The solution to the film, involving the ability of electricity to allow completion of the action started before death is a laugh and a half, but at the same times shows you what we were thinking as a civilization 130 years ago when the source play was written.

To be completely honest this is the sort of film that you need to watch on a dark and stormy night with the lights off and a big bowl of popcorn sitting in front of you. Its the sort of film that you put on to drive out the outside world and to disappear into another time and place  The perfect thing to do would be is to get another Tod Slaughter film or two and make it a grand night at the home cinema
Posted by Steve Kopian at October 27, 2014