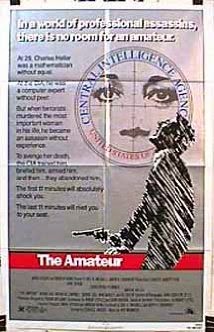 In director Charles Jarrott‘s second espionage film from 1981 (the other is Condorman) John Savage plays a CIA cryptographer whose fiancé is killed by terrorists in a hostage situation. Wanting revenge h, blackmails his bosses into sending him into the field to get the men responsible only to find things relating to his fiancé and her killing are not all that clear cut.

Made at time when John Savage could open a film, before he became a stalwart character actor, The Amateur is a tense little thriller made more so because Savage isn’t a superman. Very much not an action hero, or at least what we think is an action hero Savage plays his role very much as a character that could be you or me. He is not the unflappable Liam Neeson in the Taken films, he’s just this guy. I know some people who don’t like the film because Savage isn’t the super-agent, but for me that’s what makes the film work, this could be anyone. He bumbles his way through his self-imposed mission. He makes mistakes, gets in over his head and yet somehow he still manages to carry on.

Actually I think one of the reasons that the film worked then and still works today is that the film was made at a time when the world was locked in a cold war and the idea of spies keeping the world safe was viable. The movies cat and mouse games were mirrors of what was going on in the real world. Nowadays the idea of spies has been replaced by the notion of electronic surveillance, but back then people were needed on the street and being a spy was a dangerous thing. Also, as I said above we expect our spies these days to be super men of action. In recent films everything is tied to computers, danger comes from the double agent down the hall not from the spies somewhere in the city. In this old school film there is a sense that anything can happen and that danger is everywhere and anyone could kill you.

I really like this film and if you ask me it’s time to pull it off the shelf and dive back behind the iron curtain. 33 years on this film is best described as a lost classic (though admittedly the term classic is a loose on). This is one of those great films that are best viewed on a rainy Saturday from the comfort of your couch and with a big bowl of popcorn on your lap to deflect any stray shots
Posted by Steve Kopian at October 24, 2014