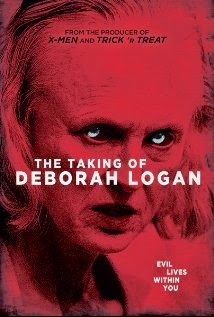 Ph.d Student  pays an Alzheimer's patient and her daughter money to allow them to film them for several months. Almost instantly it becomes clear that something is wrong beyond the diagnosis, and that her trouble might be something more demonic.

Found footage horror film is very hit and miss, even by the standards of the sub-genre of horror. There are some genuine chills in the film but it's undone by some technical issues and some decidedly fiction film camera work.

The chills in the film come in from two things. The physical performance of Jill Larson as Logan and the small  "caught on camera moments" lift the film up from the the middle of the pile it dwells in.

Larson as Logan is amazing. The moments where she goes demonic is truly frightening. She chills with just a look. The performance is made stronger by the makeup and lighting to use to deepen the horrific. Its her performance that makes the film come alive especially in the final half hour where the movie goes completely batshit crazy.

And its the small moments that send the chills. The odd look, a weird thing that can't be explained, say Logan wandering into closet and disappearing, or perfectly framed image on a computer screen say more than most of the dialog scenes. The devil is in the details , or in this case the demon is the odd shot with several images, being some of the most messed up horror images I'm run across all year.

The biggest flaw of the film is the fact the film wants to be found footage but ultimately isn't. Cameras are placed in places they never would be-I mean multiple surveillance cameras in a hospital room? Things are filmed that never would be, no documentary filmmaker would wander around the way these people do and more importantly who would let them film much of what they do? It doesn't make sense.

This would have been soooooo much better as a straight on fiction film since there is  is no reason for it to be found footage. The story doesn't call for it, the budget doesn't require it and the scenes as written don't play out as found footage.

I'm disappointed greatly in the film because when the film works, and it does now and again it's creepy as all hell, with one WTF moment near the end of the film that had me murmuring to myself.

Opening today on early EST and it hits DVD on November 4
Posted by Steve Kopian at October 21, 2014