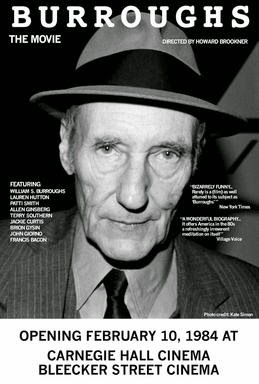 To say that William Burroughs is an influence on me is an understatement. All One need do is look at my Nome de plume DB Borroughs to see that. Additionally I have three pictures of people at my desk at work, my niece, my cousins kids and William Burroughs (who no one recognizes to my great amusement) I never thought of myself even close to him in ability nor did I ever aspire to be like him other than to be a writer.

What intrigued me about Burroughs was his vivid imagery he conjured up in his prose. There was something about it that touched a nerve, more so when I heard it in his voice, with his cadences and inflections…which was how I first heard and discovered Burroughs- reading his own material in a little film called Burroughs.

Burroughs is a biography of the man done while he was still with us. I have no idea when I first saw it, I suspect I stumbled on it on cable sometime after it’s theatrical release. I know I watched it repeatedly when it played, which may sound like much but really wasn’t it was now and again. From seeing the film I fell into reading his work and having my mind blown.

Now I have to say that before I saw the film I knew of Burroughs the man, I mean I had heard of Naked Lunch and Junkie, but I never read them until after the film. After the film I dove into the pool of Burroughs work…and it’s bee downhill from there.

To be honest I haven’t see the film in probably a decade. Yes I’ve gotten my Burroughs fix in other ways, but not with this film. When the film was announced for the New York Film Festival I was excited at being able to see it again for the first time on the big screen, but sadly because of scheduling that’s not going to happen. I have some New York Comic Con stuff scheduled against it.

If you’ve never seen the film go see it.
If you have seen it see it again.

After the NYFF screening tomorrow (tickets here) the film will get a release to theaters in a couple of weeks and Criterion special edition in 2015.
Posted by Steve Kopian at October 08, 2014