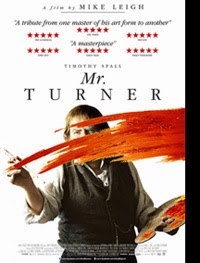 Mike Leigh's biography of British painter J. M. W. Turner is a crystal-clear puzzlement: it's wondrous how beautifully filmed it is and how sublime are the performances of Timothy Spall (Turner) and Marion Bailey (as Turner's end-of-life love Mrs. Booth), and yet how such full and rich elements leads to a film that is ultimately over-extended and frustratingly wandering. Mr. Turner is genteel but over-long, and the series of vignettes on the last years of his life parallel each other but never threaten to mix; it's as if Leigh has created three or four different films on aspects of Turner and then simply edited them into chronological order. There's almost an anti-magnetism to much of the film, and while you can come away admiring its art, you never quite feel its soul. 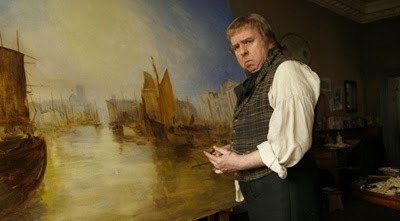 Clearly, as befits its topic, it's a gorgeous motion picture, with splashes of color and light - an early scene in a paint shop punctuates the grey dust of the establishment with brilliant splashes of literally raw color as Turner's father (a charming Paul Jesson, dandied up like a Victorian Boss Hogg) purchases supplies for his son. The film's wide country vistas, foggy seascapes, and over-decorated Victorian rooms are stunning eye-candy, and Leigh is especially successful in portraying large, scenic panoramas that fill the frame with dappled, diffused illumination and inspire Turner's greatest work. Whatever reservations I might have about the story structure of Mr. Turner, this should be seen on the large screen. 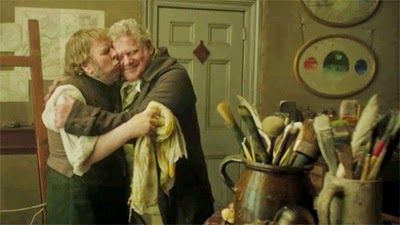 Spall both charms and amuses as the cantankerous master painter. Piggy-grunting, piggy-nosed (is it just chance that the movie poster hides Spall's nose?) Turner can be, as the situation calls for it, both politic and boorish: frigid towards his former mistress and his own daughter; empathetic and compassionate to the widowed mistress of a seaside inn who becomes his last great love. There's a mischievous, paradoxical delight in Spall's Turner creating such beauty but often so beastly himself.

This portrayal that veer into parody with a lesser actor, but it gives Spall a chance to shine: he's the disheveled, unsociable genius, veering wildly in moods from cordial to loutish, yet his portrayal never seems off-key. Turner's no hero (especially in the brutish scenes of sexual near-assault with his housekeeper). In his moments of triumph, however, you want to cheer Turner. In a brilliant, hilarious scene at the Royal Academy, Turner makes fellow painter John Constable look a fool, simply by adding a dab of brilliant red paint to his own painting. The ensuing vexation and hubbub is a punchy skewering of artists and their own egos, and Turner punctuation of the joke at the end of the scene is absolutely triumphant.

If there were more scenes like this, it might be possible to overlook the rambling nature of the film's narrative, succeeding in brilliant moments without weaving its short vignettes together. There's some inspired progression through the various scenes - the deterioration of Turner's viewing room moves from grand showcase to cluttered, insect-ridden rot - and the subplot of Turner's great affection for his father preluminates his own obstinacy on his failing health. Many accolades for the actors, the cinematography, even the direction, but at 149 minutes, it feels at least twenty minutes too long. Can we fault a film for being flawed when it paints such a flawed man as a genius? Perhaps. A tighter-edited, more interwoven plot might have made the film seem more immediate, less like a minor Victorian novel: long, rambling, full of characters limply parading through scenes, eager to fill up each chapter.