When I got the press release I was fascinated with the prospect of seeing a kind of cinematic autobiography of Heinrich Himmler. The idea of taking his words and linking it up with photographs and footage sounded like a home run. When I finally saw the film this week toward the end of it’s New York Run I found the film to be more a curio than anything else. 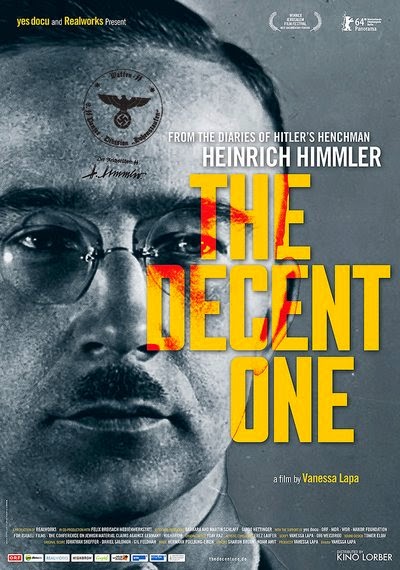 The film is based on recently rediscovered journals, letters and other papers which had been raided from the Himmler home at the end of the war by American Soldiers which had never been turned over to the proper authorities. Taking the written material (which also included material from Himmler’s wife, daughter, father and mistress) the film weaves together a loose narrative of Himmler’s life.

I’m going to do something the film doesn’t do and that is explain things, and say that Himmler was one of Hitler’s high command. He ran the SS, the police and became the Ministry of the Interior. He was one of the minds behind the Final Solution and he eventually killed himself after being captured by the British.

I lay that out because despite an occasional inter title the film never truly explains who some people mentioned are or when or where we are in connection to the war or to events in Himmler’s personal life. There is a point a point where context of the letters disappears and we’re just left with words and images. Yes they build up to a very surreal sensation at the conclusion of the film, but they never quite have the punch they should have.

And the end of the film packs a punch. The buildup of Himmler’s words about being a decent human being and how despite it all he is a good man while we witness the death and horror he wrought is extremely fucked up. Yes I knew he was a monster going in. Yes I knew he thought he was a great guy but to see, to really see the disconnect is frightening. Talk about going into the head space of a monster, this is it.

Ending aside this is an okay movie that’s for a specialized audience of people interested in the war or the holocaust, as witnessed by the space audience in the screening I attended which was entirely men well over 60 (myself excluded.)
Posted by Steve Kopian at October 24, 2014