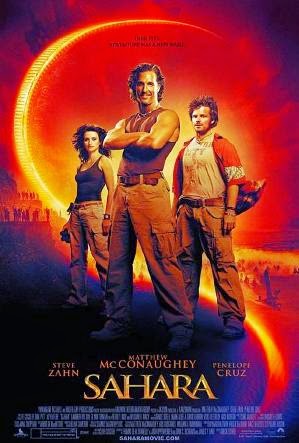 I'm a big fan of the Dirk Pitt novels. I've read most of them even when they were awful because the interaction of the heroes was always so much fun. For me any success of film adaption was going to rest on how well Dirk and Al were cast and played. Aside from Al being a bit too goofy the film makers have found the perfect casting in Matthew McConaughey and Steve Zahan, these two are destined for screen team greatness if author Clive Cussler allows there to be another outing.

The two-fold plot has Pitt looking for a Civil War Ironclad in the African desert while a doctor tries to find the source of an unknown epidemic that is beginning to kill people. The two stories of course collide as our heroes must step in to first save the doctor before saving the world at large. Its a rip roaring slam bang adventure of the sort they don't make any more.

This is the type of movie that you go to get away from it all. Its not heavy or earth shaking, but its wonderfully distracting. Go see it. If you can give yourself over to it you'll have a great time.
Posted by Steve Kopian at October 25, 2014