Goodbye to Language (2014) or it's time for Godard to call off the joke. 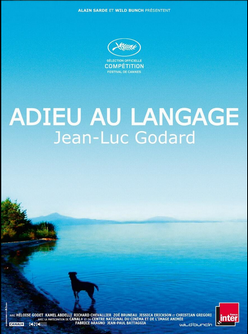 I don't care what Godard did in the 60's and 70's the man needs to be have his editing suite taken away and he should be sent to a rest home.

Once there he should be joined by the cineastes, intelligentsia and self absorbed self important morons who have been championing his films of the last few decades. Either they need to admit their championing of his films has been a grand joke, or if they are genuinely rapturous about the crap Godard has been turning out then they should have their laptops confiscated and their fingers broken. These people can not be allowed to champion any sort of film when they clearly have their heads up their asses.

All of this brings me to Godard's latest- Goodbye to Language. Hailed by some as a great 3D film, the damn thing gave me a head ache and almost put me to sleep. I would have walked out but I was at the wrong side of the theater to escape.

There is no plot. Some gangsters run around shooting people, a dog wanders around, a couple wander around their house naked, except when they fart or shit while talking about the equality of all men (because then when it's clear all men are equal). There is talk of metaphor and other high ideas, all of which are cribbed from other sources. We watch clips from old films. And then after nothing happens we watch it snow while in a car and windshield wipers remove it from the windshield.

The truth of the matter this looks like the test reel of someone who just bought a new camera with some gangsters spliced in. If you came upon this film in your maiden aunts drawer you'd toss it in the garbage. That maybe the point, but at the same time it says really crappy things about the supposed great director that he's turning out such crap and asking us to pay for it. Personally I'd rather not pay my maiden aunt to see her home movies.

I completely understand that Godard is supposed to be a cinematic jokester, that this film may not be anything other than a joke, but his sense of humor has clearly escaped him like his ability to make a watchable movie.

As for the 3D- yes its clear that Godard knows how to arrange objects to exploit it (watch the way he angles a bench) but mostly its horrible and pointless- more so since he inter-cuts old movie footage which is flat. Other than one sequence where Godard fucks with the audience for a couple of seconds by having different images for the right and left eyes to look at there is even less of a reason for this to be in 3D then Guardians of the Galaxy.  (Thankfully the dual eye effects will prevent this from ever being shown 2D since there is no way to do that flat.)

Godard’s use of the 3D is not ground breaking. If you are saying it is then you haven’t seen enough 3D films nor understand the medium. The highlight is angling benches. The rest of the film looks exactly many any other 3D film I’ve seen including some an acquaintance shot for a local museum show in the 1990’s on the medium- no wait the museum stuff was better.

What a freaking joke that people actually think this groundbreaking.

Someone sitting behind me during the press screening was going on about how great the film was and how this was his second go through of this "amazing" film. Had he not left when the credits rolled I would have grabbed him when the lights come up and forced him to eat every word he's ever written so its erased from human existence before I bludgeoned him to death with the arm that he writes with.

Don't get me wrong I don't hate the film, its such a steaming pile of poo that it will be quickly be forgotten, I just hate that people keep letting Godard make films- worse I hate that they think his films are not shit.

While I don't wish anyone dead, I kind of wish Godard would die so that people can be objective about the crap he's turned out lately.

The film opens today at the IFC Center in New York. Avoid this one like the plague unless you are a self important mindless prol who has no idea what good movies or good cinema is.
Posted by Steve Kopian at October 29, 2014

Email ThisBlogThis!Share to TwitterShare to FacebookShare to Pinterest
Labels: 3D, ambivalent post, france, not worth the effort, nyff2014