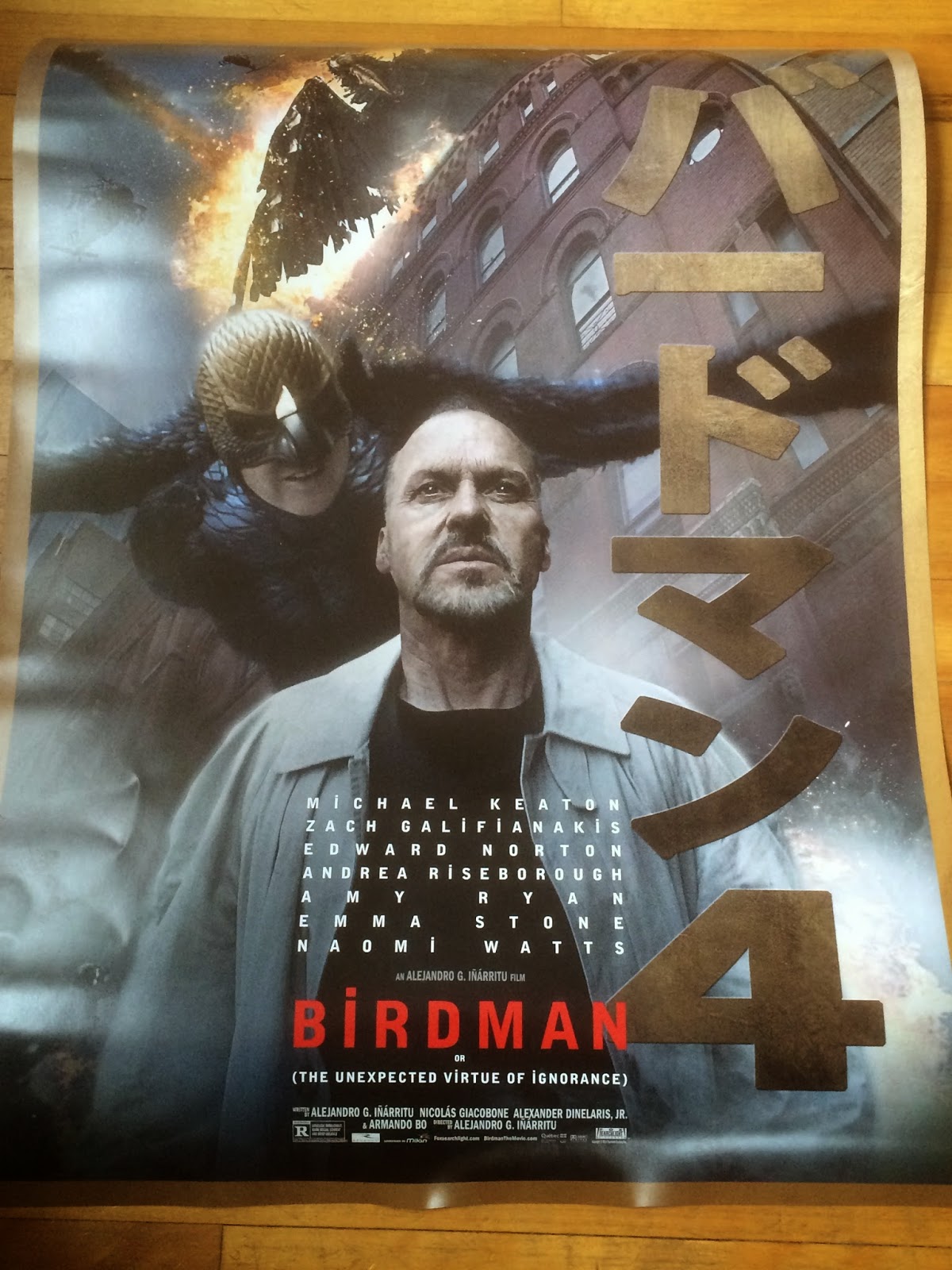 As I waited on the long line for the BIRDMAN panel at this year's New York Comic Con, consisting of a spartan but heavy hitting ensemble of the film's stars Michael Keaton and Edward Norton plus moderator and arbiter of all things geek cool Chris Hardwick, I wondered if anything on hand could possibly psyche me up any more for the film than I already am. With a world premiere at the New York Film Festival tonight, which includes screenings in several of its theaters throughout the evening, and a run as part of Alamo Draft House's 'Drafthouse Recommends' series lined up, tickets are virtually in my hands already.

Consider me all the more psyched.

The vision of director Alejandro Gonzalez Inarritu, whose lean filmography boasts of a consistently high quality (Amores Peros, Babel), BIRDMAN looks to be his most colorful and pop-culture related to date. On the surface is a story of once prominent actor (Michael Keaton), most famous for his role as star of the superhero movie franchise, BIRDMAN, as he grapples with his fall from the spotlight. Under the surface...There is much occurring under the surface. Hardwick commented early on how the panel felt a bit out of place at NYCC since the movie feels virtually nothing like the prototypical superhero movie.

Things began with the showing of a generous and confident 10 minute clip from the film. What appeared to be its opening moments. Within we find a meditative Keaton, vibrant swirling cinematography, an anarchic punchy jazz score, an inner voice (SO familiar, but as of now unable to determine whose it is), possible psychic powers, and the wonderment of what is real and what is a product of the character's mind. There is an interesting blending of fictional and real life details, as in when the actor's agent (played by Zach Galifianakis) lets him know that Iron Man's Robert Downey, Jr. and other more worthy actors are unavailable to work with him. 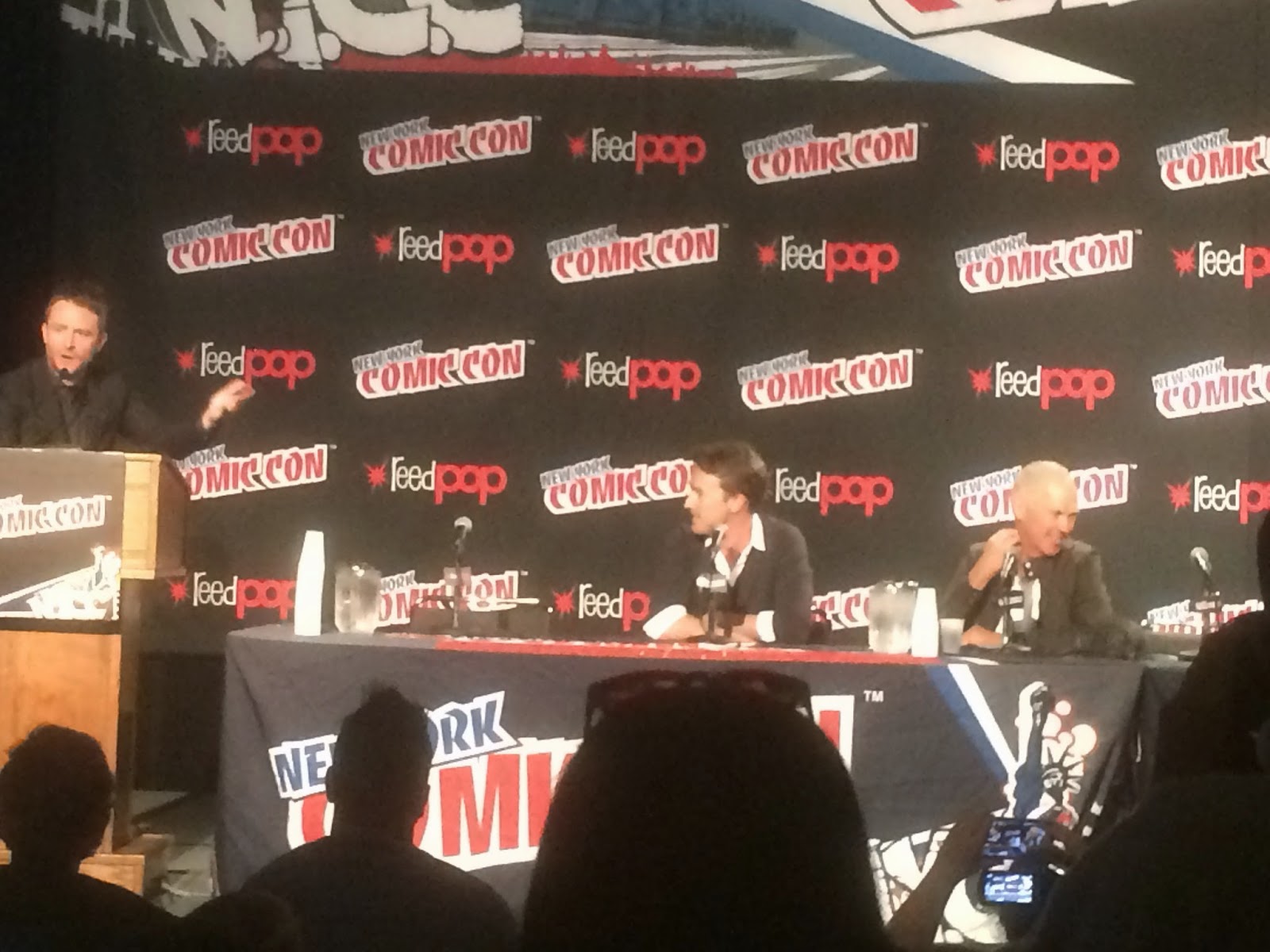 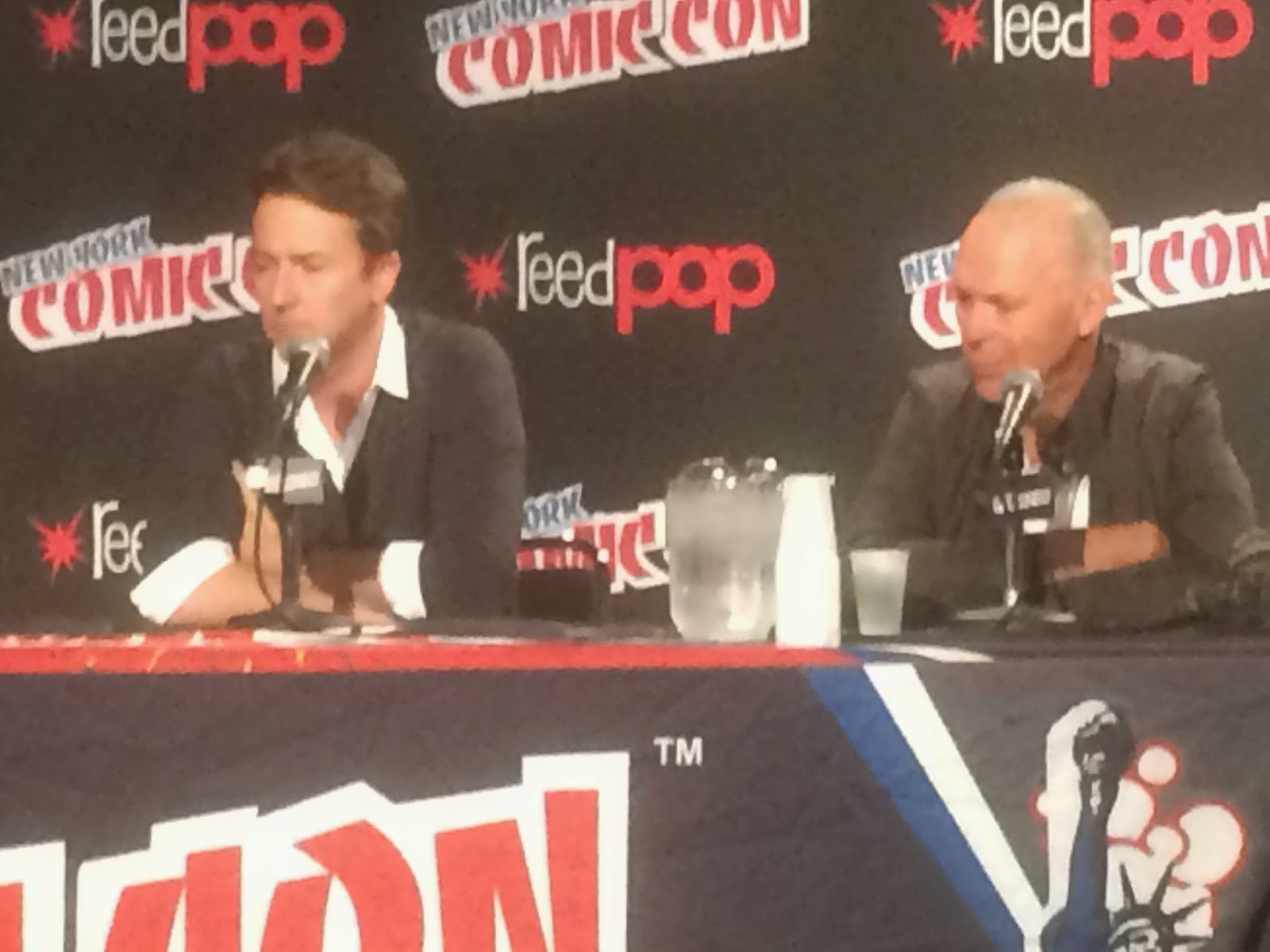 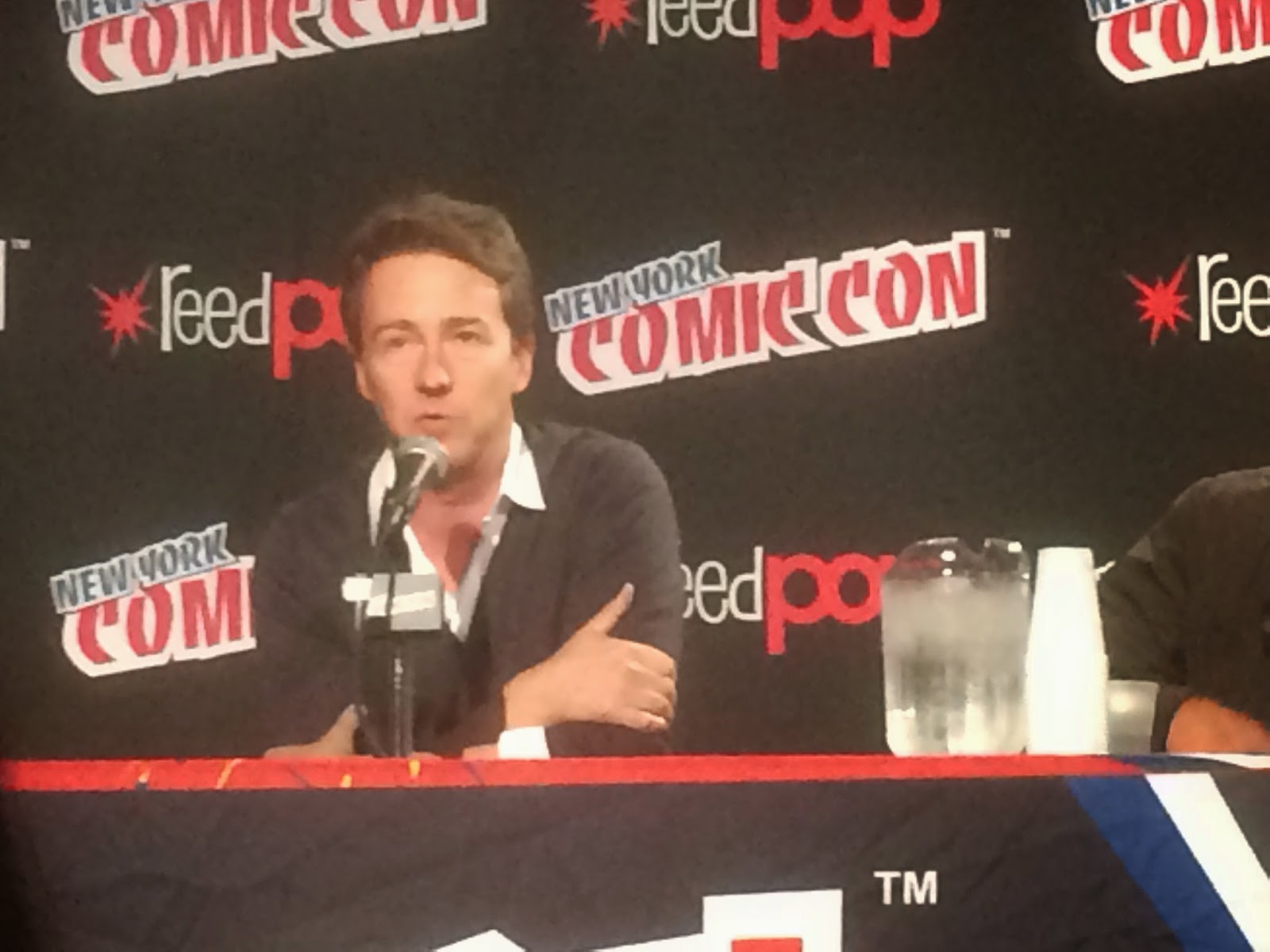 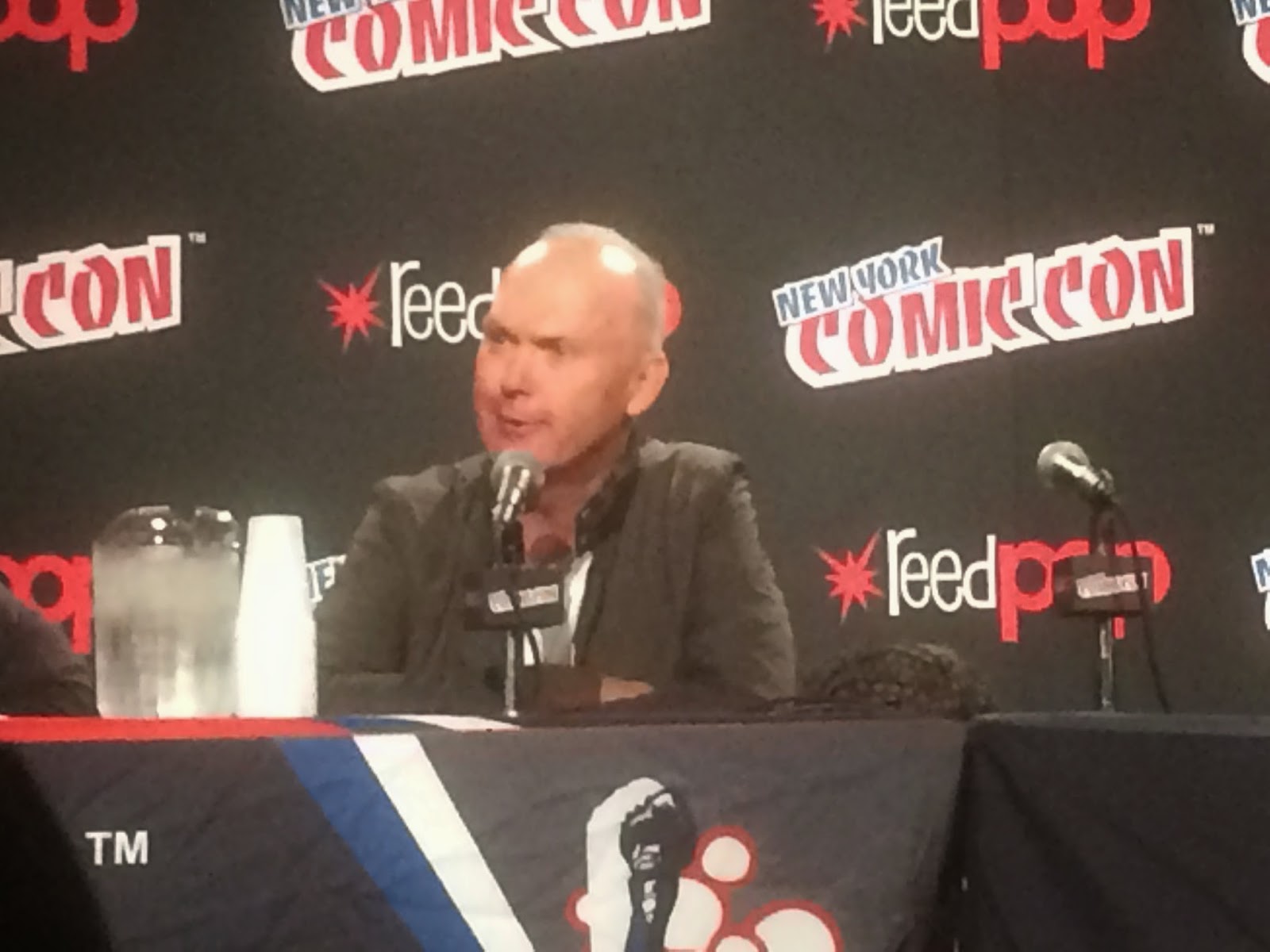 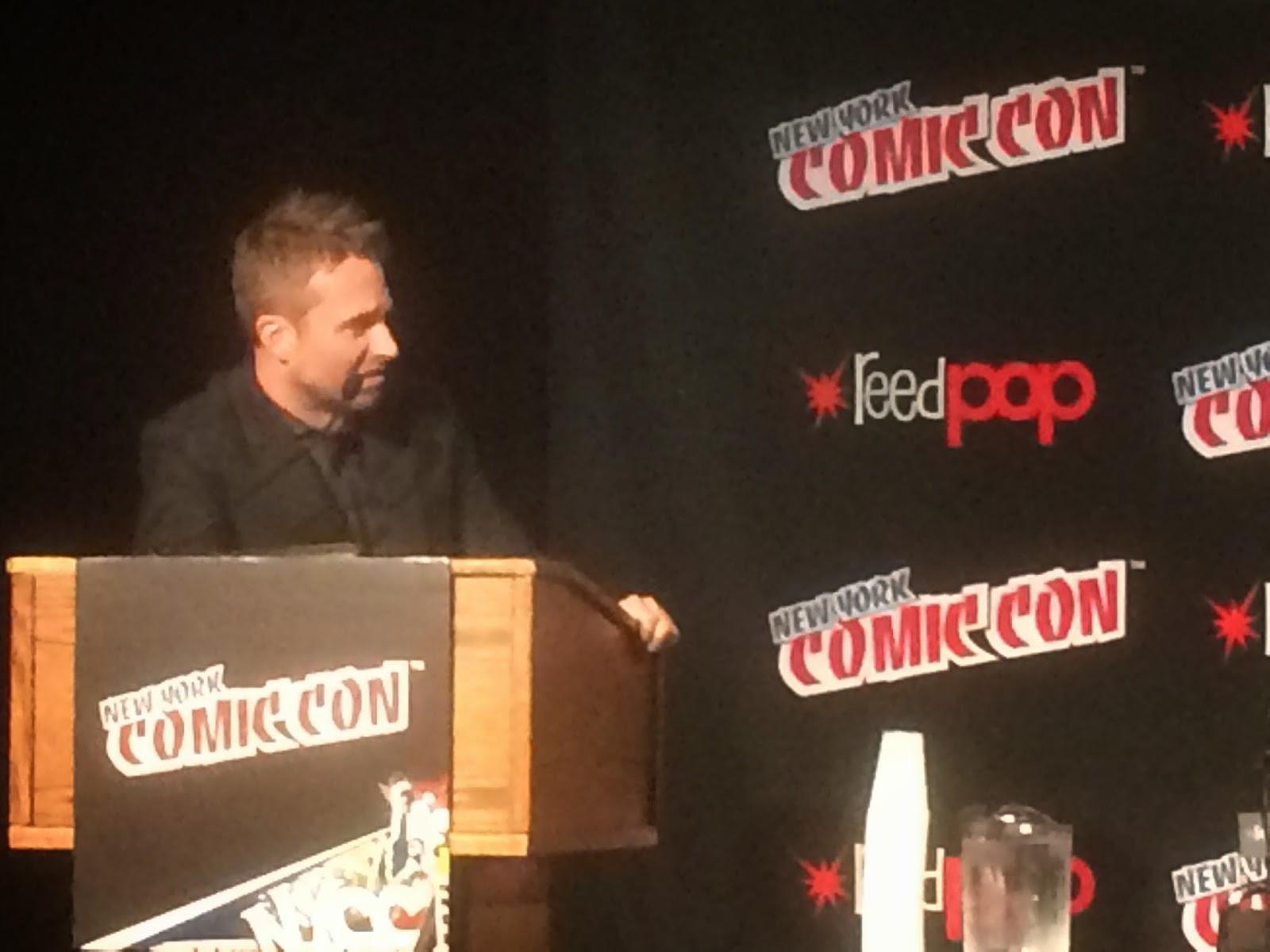 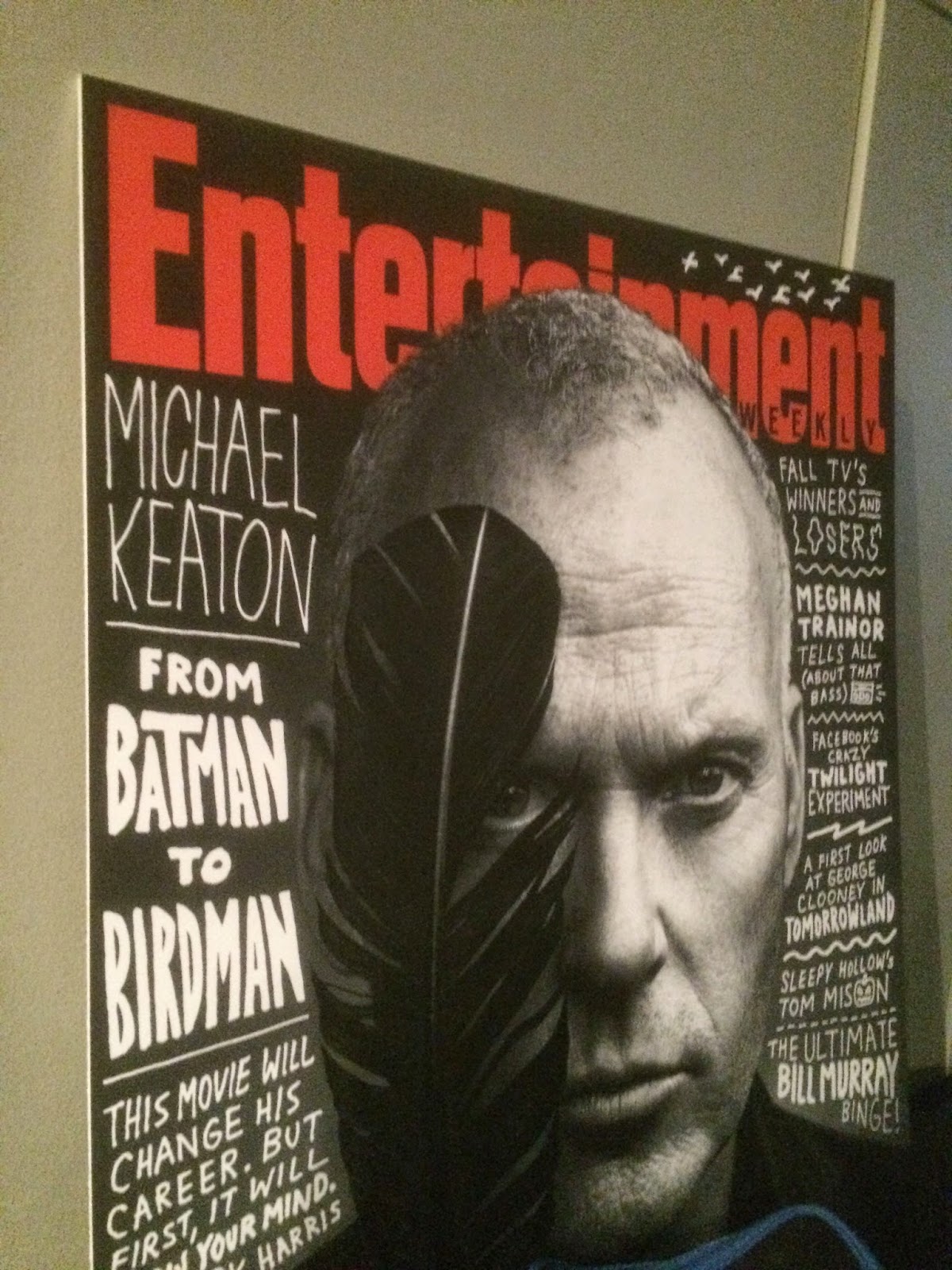 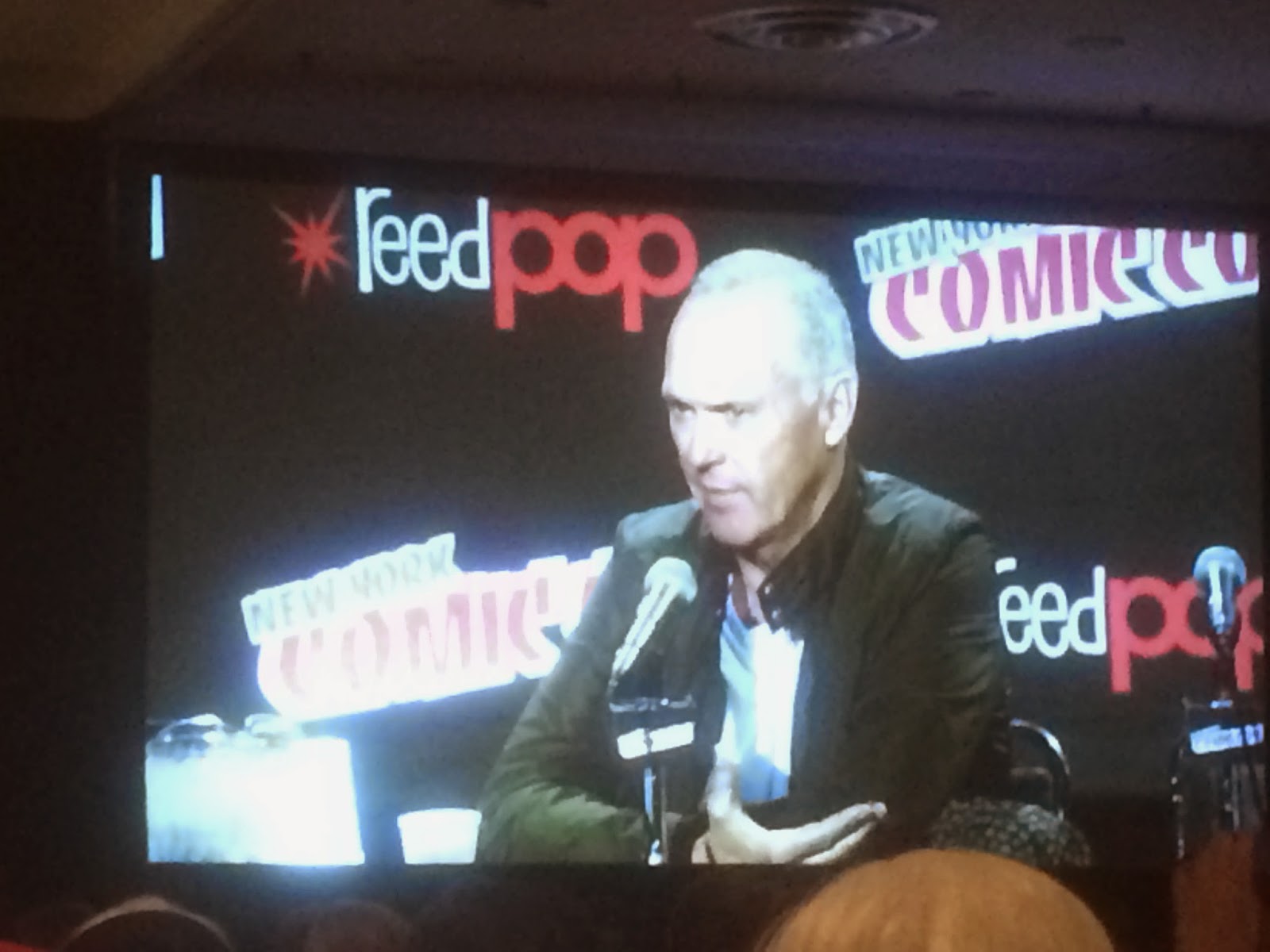 With the mind processing all of this, Hardwick brought out Keaton and Norton for a discussion, blessedly absent of an audience q & a. The actors' enthusiasm for the film was apparent, but not the stuff of prideful self confidence. They spoke of the awe they felt with the multilayered fabric of the film upon watching its completed form. Norton likened the wondrous experience to watching the finished version of David Fincher's Fight Club for the first time some 15 years ago in the same screening room. He also expressed his belief that the cinematographic achievement is on par with that of Gravity, though of a different nature (both are the work of Emmanuel Lubezki).

There was much praise for Inarritu, as Norton described the process of acting in the movie as having to adjust and move in accordance with the elaborate dance the director was orchestrating. He also commented on the film's meta humor. Hardwick described the film as feeling amazingly like one continuous long take. The 10 minute clip that was shown certainly supports this notion. It was said, I believe by Keaton but its easy to lose track, that everything in the film, especially characters, seemed an expression of Inarritu himself. And, perhaps like Inarritu or any individual, the characters are multifacted with both positive and negative qualities.

When asked by Hardwick if the protagonist is ultimately a good guy...or not...Keaton replied that he simply expresses truth. Although that's something people don't often want to hear. The truth, that is.
Obviously on a stage like Comic Con, his role as the first and, through pop culture's fickle historical remembrances, somewhat maligned Batman to appear in a major motion picture, was far from overlooked. Rather, it was a point of emphasis.  It makes his casting as Birdman seem far from coincidence and perhaps a plat at some of that meta magic Norton referred to. Nevertheless it was a brief bit of story telling intrigue when Keaton described one of his first meetings with Tim Burton. Going over the initial script and all of the aspects of the vision he disagreed with. Tim (Burton) nodding repeatedly, a mop of hair flopping up and down over the notorious director's face leaving little indication of what the nods actually signified...Here we are some 25 years later and as has been the case with a few pairings of visionary directors and actors past their prime, Keaton may have been given a platform upon which he can truly soar.

Look for reports from Steve who ventured out to attend the film's morning press screening in advance of its premiere tonight!