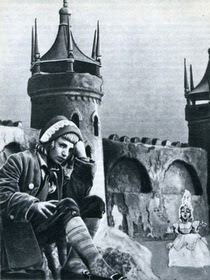 Early film from legendary Soviet filmmaker Aleksandr Ptushko is a blast and a half. To be honest I have no idea how the film is as a film, but as eye candy this film is way cool.

The plot of the film has a bunch of student campers setting sail in a large boat they restored as their yacht. They land on an island and while resting one of them begins to read Gulliver’s Travels. As the story is read one of the kids imagines himself in the story, fighting pirates and then in Lilliput and elsewhere.

The film is an amusing romp. Its very much a kids own sort of adventure with the story playing out as a kid would imagine it, the early pirate sequence is wonderfully silly. Yes the film turns political. There is talk of the man mountain being evil and there is talk of a workers revolt, but it's more a distraction

The real joy however is the huge scale animation that blends the human actors with some marvelous models. I love the great characters of Lilliput. How the hell did they do this on such a huge scale. I’ve never seen animation done this level before. The fore ground is animated, the background is animated, real life and what appear to be toys are mixed with the animation models. I have no idea how they did it.

It’s amazing on a level I can’t describe. I mean how much work did they put into this? How long did it take to do it? Wow doesn’t do it justice.

If you want to see true movie magic you must see this film. Seriously it will blow you away.
Posted by Steve Kopian at October 21, 2014