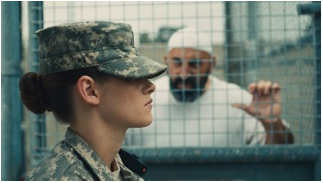 Kristen Stewart stars as Amy Cole a girl from a boring town in Florida who joins the military looking for something. Sent to Gitmo to help guard the detainees she breaks regulations and strikes up a friendship with one of the men. This leads to complications...

All hail Kristen Stewart who puts forth one hell of a performance. Between this and the soon to be released The Clouds of Sils Maria Stewart will have effectively silenced the critics who said she couldn't act.  While I think it's too soon to give her an Oscar she's at least turning in performances that engage and move you.

Camp X-Ray the film is a damn fine film despite a feeling of deja vue. You'll forgive that statement but it's unavoidable, the genre of the prison camp film has a long history going all the way back to before Grand Illusion laid out how we all are basically the same no matter where we're from. Here the plot is updated to the Gulf War and sent out again as new. While ultimately the basic plot line is not new the trappings are and coupled with  the great central performances by Stewart and Peyman Moaadi as t
he prisoner she befriends the film turns into something special.

I like this film  a great deal, actually I like the film a hell of a lot more than I thought I would. I say that because I got the film out of pure curiosity, I wanted to know could Stewart pull of a very serious and layered role. She can and she did. I wasn't too sure going in and thought that I'd watch the film for say a half an hour and then bail so I could write up a poor review picking on the lead actress.  Instead I found a film that not only raised a lot of questions concerning the detainees and how we treat them, but also moved me.

This is a really good film and is worth your time and money when the film appears in theaters and on VOD this Friday.
Posted by Steve Kopian at October 13, 2014