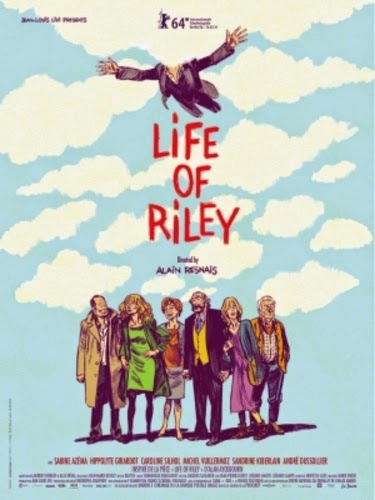 Final film from Alain Resnais is an adaption of a play by Alan Ayckbourn. For me it's a mixed bag.

The film tells the story of a group of friends who discover what happens when they find out one of their number is terminally ill.

A marriage of theater and film similar to Resnais' previous outing You Ain't Seen Nothing Yet, with the action taking place on sound stages stages with curtain backgrounds. Its all stylized and comes off as a kind of filmed stage play or TV adaption (most Ayckbourn plays end up filmed for TV.)

Ayckbourn is a hit or miss writer. Decided prolific his works tend to be of interest for some twist- the three interlocking plays of the Norman Conquests, or the two plays House and Garden which are performed at the same time in two separate but connected theaters. His films are highly theatrical and of a type with most of them dealing with the relationships of various friends and couples. For me their is a sameness to them. They are for the most part good or very good, but you end up remembering them for his twist (like House and Garden) or a performance (Janie Dee in Comic Potential) rather than for the play themselves. Having read and or seen 25 or more of his plays I couldn't tell you much about any of them other than I laughed.

Resnais has a history of working with the Ayckbourn adapting two other plays by playwright making him responsible for 3 of the 5 theatrical film adaptions that there are. The films this, Smoking/No Smoking , and Private Fears in Public Places are good but are not particularly memorable (And I only remember Private Fears because I have a VHS copy that I got off cable on a bookshelf at home.) I really don't know what facination the director has with the playwright other than his plays match his sense of theatricality.

Strangely this is an example of what I consider a major flaw of the New York Film Festival which involves taking films from long time attendees or cinema gods whether they deserve to be show cased or not. I'm not going to get into a long digression but there are times when the festival seems to take films from certain directors simply because they have a new film out.  This isn't meant to belittle the films, and in this specific case The Life of Riley rather it's just to say that I think had this not been the directors last film this would not have been at the festival this year.

A good, funny film, but odds are it's an enjoyable film, which you'll forget ten minutes after you leave the theater.
Posted by Steve Kopian at October 09, 2014