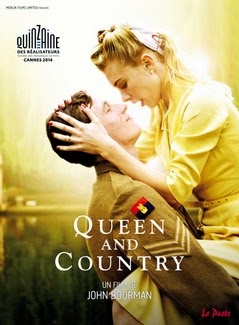 John Boorman's wonderful throw back film is exactly the sort of film they don't make any more. A glorious nostalgia piece the film is reminds us how much worse off we are with slick big budget action films or low rent mumblecore "slices of life".  While imperfect, due to some tonal shifts, the film is still a small unseen treasure of a film that reminds us what movies can be.

Picking up literally at the end of John Boorman's Hope and Glory, Queen and Country then jumps ahead 9 years (1952) as Bill is called up for military service and Korea. Hoping to go to Korea to teach recruits how to fight he he instead ends up stuck teaching misfits how to type while battling some seemingly deranged superiors. He also becomes fascinated with a girl he can never have.

All hail the return of a master filmmaker. We haven't seen a film like this in decades, I suspect largely there aren't that many filmmakers who can do what Boorman has done here, and that is turn out a film that feels, rightly decades old. In giving us his story from 60 years ago Boorman has done the miraculous in that he has made us feel what it's like to have been living back in 1952- though with a language and a few twists that are purely modern day

The film is is first rate in pretty much every area. The performances are wonderful, the look is gorgeous and the script is on target most of the time. This is exactly the sort of film that you think of when you think of the days in the 1960's through the 80's when English films out shone most American productions.

To be honest as wonderful the film can be the film suffers from a couple of bumps along the road  owing largely to the shift from serious romance/coming of age and the humor of the tormenting of the superior officers (played by David Thewlis, Richard E Grant and Brian F O'Byrne). The craziness of  the search for the clock, while vital to some of the twists in the film, occasionally plays a tad too silly. The unevenness makes what should have been one of the great films of the year into one of the near great films of the year.

I know there is going to be a desire to compare Queen and Country to Hope and Glory but it is really not fair. Hope is a kid's eye view of the war and growing up filtered through the nostalgia of a knowing adult, The clash of child-like wonder and adult knowing allowed for some truly magical moments-the ending of the film with it's "Thank you Adolf last line". On the other other hand Queen possesses a slight world weariness. This is not so much the death of boyhood so much as the the beginnings of adulthood, but not of cynicism. Bill grows up but he never becomes cynical which is why his heart and ours breaks occasionally, but also why there are moments of great joy and emotion. You can't weigh one against the other since they are really one story.

I love how the film seems so simple and yet ponders such great subjects as honor, tradition, the effects of war, love, family and the male female dynamic. Queen amps up the themes and ideas that were lurking around in Hope and made them into something much deeper and thought provoking.

I really do love this film a great deal. Its a film that came from nowhere for me and turned into a film that will be everywhere as I recommend it to friends and family.

The film is getting a single screening on the 7th at 915 under the banner Film Comment Presents (tickets here). If you want to see one of the most special films at NYFF this year and  what is destined to be one of the most under seen films at the festival see this film.

This is a film that reminds us why we love the movies.
Posted by Steve Kopian at October 03, 2014