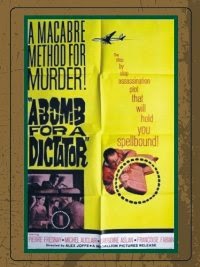 Bomb for a Dictator is a dark little film that took six years to find a US release. Produced and released in Europe in 1957 the film didn’t get a US bow until 1963. I’m guessing the dark attitude and pessimistic tone kept it away from these shores.

The film follows two rebels in Paris making plans to bomb the private plane of recently installed dictator. The plane will be taking the despot home and the bomb will strengthen the freedom loving rebels back home. Unfortunately plans change and the private plane is scrapped for a commercial flight. Suddenly its not a few true believers who will be killed but a plane load of innocents. Will the rebels go through with their plan even if it means non-combatants will die. What happens is not quite what you expect and is a tense edge of your seat ride.

The tension begins with the opening pre credit sequence where a bomb is welded into a typewriter, continues on through the opening credits sequence which has graphic documentary footage of rebellion and retaliation in what appears to be a Latin American country and then continues on into the film proper. Right off the bat we know the film is playing for keeps and keeps up that attitude until the final fade out.

The best part of the film is that the film doesn’t tip its hand at any point. Where its going, and what is going to happen isn’t set in stone, and even when a few expected things happen what happens in their wake are not. This is very much unlike almost any other film you’ve seen.