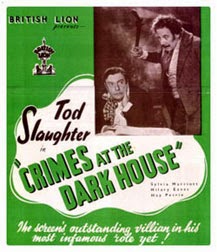 If you want to see Tod Slaughter at his most over the top and wildyy insane this is the film. It's based on the Wilkie Collins story The Women in White.

The film opens with Slaughter killing a prospector in Australia. It’s a gruesome killing, even by todays standards as Slaughter drives a spike into the head of his victim via the ear canal. Slaughter than steals the man’s money and a letter saying that his father has died and that he is now the Lord of the manor. Slaughter then assumes the identity of the dead man and heads off to take over the estate. Slaughter is completely out of his depth, but manages to run over everyone who is try to make sure he’s the right guy buy checking on a mole he supposedly has or being recognized by the woman with whom he is to have fathered a daughter. Unfortunately bluster only carries him so far and he soon has to start up his killing ways.

When I say this film is wildly over the top and completely unrestrained I’m not kidding. This film gets completely nuts as Slaughter chews scenery and behaves very very very badly. Why anyone puts up with the nonsense is beyond me. Actually what’s beyond me is why this never ended up on MST3K or Riff Trax since this film is funnier than it is scary. You really don’t have to make fun of it because it’s making fun of itself

Thinking about it this film is probably the litmus test for whether you like Tod Slaughter or not. If you can go with him here you’ll be able to go with him anywhere.

I love this film a great deal. It’s a perfect party film. If you like you horror tinged with (unintentional) humor see this film.
Posted by Steve Kopian at October 30, 2014