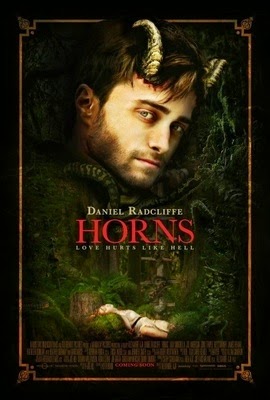 A very dark fable and heart breaking romance of the highest order. Its a glorious film that doesn't take the easy route and is so much more satisfying for it.

First bit of business this is not a film for the kids, there is sex, violence, darkness and fuck is said about 800 times.

Daniel Radcliffe play Iggy an unremarkable young man in pretty much every way except for the fact that he has a the best girl in the world Merrin. Ig’s world is blown to hell when Merrin is found murdered and his statements are misconstrued as guilt. As the whole world turns against him, Ig doesn’t know what to do. Things get weird when Ig begins to grown horns, which everyone kind of ignores-except that the horns force the people around him to hell him what they really feel.

More fable then horror story, this semi tragic romance with humor is one of the biggest surprises of the year for me. A wonderful adult delight is exactly the sort of fairy tale that people don’t do any more. I loved this film which is brimming with all sorts of idea, emotions and even humor.

To be honest I don’t know what to say about the film, not because I can’t, I can wax poetic about the film and if you’ve talked to me over the 8 weeks since I first saw the film you know I will go on at length about it, to be honest it’s become one of my favorites of the year, but at the same time I don’t want to tell you anything about the film, I don’t want to wreck the emotion that the film generates, I want you to gop out and just see it, knowing as little as possible. I want you to be like the people around me who laughted and cried and bounced with delight during the course of the film. While I will say that the film has one of my most favorite moments of the year involving the use of the song Personal Jesus, I won’t say anything else.

I do have to say that director Alexandre Aja who has gone overboard with violent nattiness in previous films such as High Tension, manages to hit the right balance here. While there is some nastiness in the film (some of this is not for the squeamish) it’s done at the right time and the right way.

If you want an adult fable and down mind the dark, leave the kids at home and go see Horns, one the years biggest surprises.

The film opens Friday in theaters and can be had on VOD now
Posted by Steve Kopian at October 27, 2014