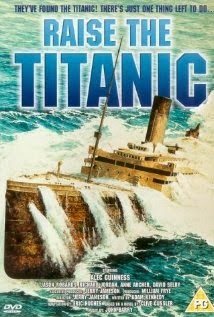 When Clive Cussler wrote the novel of Raise the Titanic we were still something like fifteen years from actually finding it. There was a few less between the film version and the discovery of the wreckage. For many people, including Cussler there is a feeling that the film should have been dropped down on to the lost ship.

I on the other hand love the film a great deal, always have. It was a love of the film that got me into Cussler’s books. Cussler is one hell of a yarn spinner and even if his tales frequently fall into too fantastical to be true, they are rip roaring yarns

The plot of Raise the Titanic has the government creating a new weapon to fight the cold war with. The trouble is that the only known power source is a highly rare element that was is under Soviet control. However it’s discovered that a large deposit of the mineral had been mined by some American back in the earlier part of the 20th century and brought to the United States. Actually it made it as far as the Titanic and it’s maiden voyage. Desperate for the mineral the US government asks Admiral Sandecker and his NUMA organization to go looking for the ship and if possible raise it. Intrigue of course follows as trouble shooter Dirk Pitt is called into action.

This ain’t high art, it’s high adventure. Yes the special effects aren’t the best, NY TV film critic Stewart Klein said the underwater stuff looked like it had been filmed in a bath tub, but they are serviceable. The trouble was Star Wars came to town and raised the bar to an incredibly high level. People wanted hyper realistic effects, unfortunately this was before computers and no one had really worked out how to do the underwater stuff so it looked properly spectacular. It’s a minor flaw, but it’s not fatal unless you are going to be a movie snob.

I know the film, which was slowly starting to get a better rep when the ship was indeed found, thus wrecking the film’s premise of finding it intact. I know the film fell off the face of the earth for a while in the aftermath, but it’s slowly coming back simply because it’s a good film.

That the film works it’s simply because it’s a good yarn. It grabs you and pulls you in. The film’s structure of having a crisis and then needing to do a series of impossible things to solve it is near perfect. First our heroes have to find the ship then they have to try and raise it, and of course there are complications. Its just the sort of popcorn film you’ll want to curl up with on the couch.

Of course that the film works is due to the plot which is a gas, and the cast which is great. Richard Jordan is a great Dirk Pitt. He’s clearly a strong presence and capable of leaping into action. He’s so good that he remained in my brain when I was reading the novels. Jason Robards is a great Sandecker, radiating the right amount of stern control. I also like David Selby as a scientist brought into help Pitt. He maybe a stuffed shirt to start but Pitt manages to loosen him up.

This is a great great film. It’s the perfect thing to relax to.

Sadly Cussler hated the film so much that he refused to allow anyone to make a movie based on his books for decades. It wasn’t until he became heavily involved in the making of Sahara (which he also hates) that Pitt returned to the big screen for the last time. Sadly Cussler’s argument against both films is that the wrecked his carefully crafted stories. No offense Mr Cussler, I’m a fan, but let’s face it your plots are ludicrous in the extreme. They could never work anywhere but on the page unless they have you prose to speed us past the bullshit. There is only one of your novel’s that I’ve read that wouldn’t have to be changed (INCA GOLD) because they are so silly you can’t see them in a real world setting without falling over laughing. Honestly that as why I gave up on them around the time of VALHALLA RISING

See Raise the Titanic and have a good time
Posted by Steve Kopian at October 26, 2014