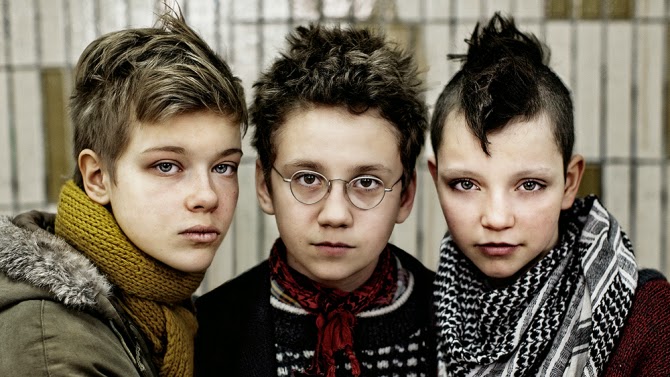 We first meet Bobo, sitting sullenly in the corner of her mom's rambunctious 40th birthday party. Awkward and androgynous, she's appealing and out of place. This is not a a world she wants to be a part of, but you immediately want to be a part of hers.

It's 1982 in Sweden and everyone keeps telling Bobo that "punk is dead." Bobo knows different. Punk isn't a genre of music. It's a feeling you have in your heart.

Lucas Moodysson's We Are the Best!, based on his wife's, Coco Moodysson, semi-autobiographical comic, Never Goodnight, is the punk-rock movie you didn't know you wanted but absolutely needed. It's one of the few movies that gives absolutely respect to the inner life of girls. There is nothing here that makes fun of them. They are treated as the absolute forces of nature that they are.

The reserved Bobo and her more antagonistic friend, Klara, decide to form a band on whim -- mostly to show up a few jerky teenage boys that made fun of them. Despite not being able to play instruments (or know anything about music), they decide to write a song about how much they hate gym class. In the process, they befriend the talented but conservative Hedvig.

The three girls' friendship is at the core of the movie. They are all open and sweet, and the three young actresses (Mira Barkhammar, Mira Grosin and Liv LeMoyne) bring a natural quality to their roles. Some scenes feel improvised and the chemistry between the three is a delight. Even when they come into conflict over boys (stupid boys!), it is such a minor part of their journey. The band is the most important thing! It's so refreshing to see a movie that celebrates female friendship in such a way.

There is sweetness at the core of this movie -- all three girls come from loving families. While Bobo's parents are separated, they both still care about her. Klara's family is wild but supportive and while Hedvig's family is presented as being a bit more uptight, her mother just has her best interests at heart. The lack of conflict grounds the movie. The girls don't really have much to rebel against, no, but that makes them feel real and honest. Maybe there are bigger problems than gym teachers, but these girls are fighting against what they know to fight against. I'd be excited to catch up with them in a few years.

This is a kind-hearted movie that shows the power of girls to change their worlds. I am not 13 but I still want to go start a band now. It's never too late to be a punk.
Posted by Eden at October 25, 2014