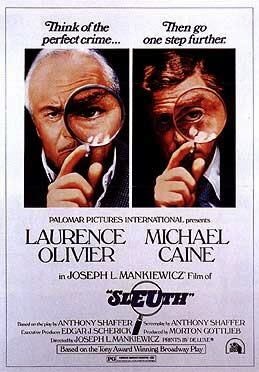 My favorite story involving the original film version Sleuth is that of a TV station, I believe it was from Boston, but it could have been one out of Pennsylvania (I was seeing it on cable TV in the early 80’s) who would run the film in their evening movie slot. However to fit it into their allotted time slot they ended the film at what was the first act closer. For years I thought the film ended one way, when in fact there was still half a play to go. It wasn’t until I saw the film run on another TV station that I realized how it was all supposed to go.

The plot of Sleuth, very simply involves a rich writer, who has made his money writing mysteries calling his wife’s lover to his house for a man to man talk. The writer tells the lover that he completely understands that his wife is going to leave him, and that’s fine with him. However before he lets her go he needs to understand a few things… This sets in motion a cat and mouse game that is both wickedly funny and decidedly terrifying.

In the 1972 film version the two men playing the deadly game are Laurence Olivier as the husband and Michael Caine as the lover (in the god awful remake Caine would play the husband) and the casting is spot in perfect. Its so good that both men were nominated for Oscars. They are so good that you don’t think they are acting. If you want to see how sly rye and damn good a witty mystery can be performed see this movie.

Of course I seem to be implying that it’s all the actors doing and that isn’t the case. The film works because of Anthony Schaffer’s sterling script. Its witty and wise and crafted to absolute perfection

This is one of my most favorite films. I love to just listen to it and it’s rhythms
Posted by Steve Kopian at October 04, 2014