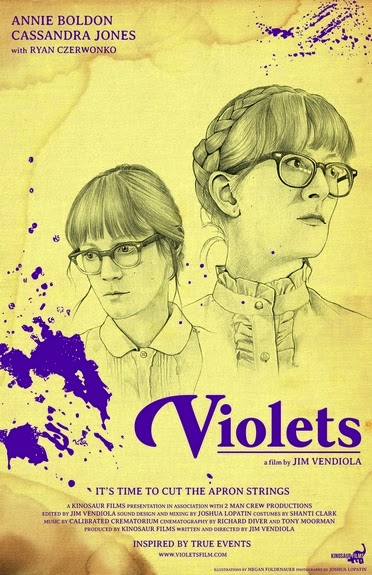 Jim Vendiola's VIOLETS is small scale subtle piece of horror that the director says is based on true events. While not a film of overt scares it is one that will creep you out.

The film concerns two women, what their relationship is is not explained in the film. Its clear either they are either near incestuous sisters or lovers.  Time passes. They clean houses. They go to the botanical garden, they eat their meals from cans. Then one day they put their plan into action.

I can't tell you any more, I don't want to ruin the film for you since this is a film that not a lot happens but yet a great deal does.

The film works because Vendiola manages to create a mood and a sense of the world askew, from the opening electronic riff that is heard several times threw the film, to the twinning of the the two women, the use of silences and the stark, almost bare visuals this film wonderfully creates a world that is off.

I love the look of the film. I love the starkness of the women's world. There are huge open spaces even in their confined apartment that give us a sense of emptiness. Just how empty their world is is revealed in several of the final moments which kind of flip the emptiness on it's head.

Curse you Jim Vendiola, you've made a film that is damn near hard to discuss unless you're doing so with someone who's seen it.

While I like the film a great deal there is one niggling question that keeps me from calling it a truly great little film - then again it could be me over thinking things. Sadly it's not something I can discuss, lest I wreck a bit of the film for you. However niggling question or no this is a really good, nay near great little film, that is worth your time and the effort to see it when it plays near you. (The film is currently under consideration at a number of festivals for the 2015 season. and it will appear online next year)