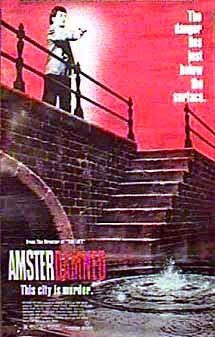 Dick Maas is an award winning filmmaker, that hasn’t stopped him from occasionally drifting down into the exploitation ghetto with films like Saint about a killer Santa Claus or The Lift about thinking elevators that kill their occupants (don’t laugh the film actually works). He’s also made A film called Amsterdamned, which is where I discovered him.

Amsterdamned is a great little thriller. Less horror film and more a thriller the film concerns hard boiled detective who pieces together that a bunch of random killings around the canals of the city are actually the work of a serial killer. The killer hasn't been discovered because he comes in and out of the city's canals when no one seems to be looking. The detective has to scramble to try and stop the mad man before he kills anyone else.

Way back in my video store days Amsterdamned was one of those films I was constantly recommending to everyone who wanted something they hadn’t seen before. They’d always come back and want another film like that. While I could recommend other good films, I couldn’t really recommend anything like it. Dick Maas’s films aren’t like anyone elses, or even his own since he jumps from genre to genre and style to style with the greatest of ease.

If I were to say what the film was like I’d have to say the German film called the Embalmer about a frogman wandering around the canals of a European city, but outside of the plot the two films are different since the embalmer is a moody black and white film that fits into the Krimi genre of the mid-60’s where Amsterdamned is high octane thriller with a great chase or two.

Say what you will about Mass and his films, there is no denying how good he is at staging a chase, all one has to do is look at any of his chases, say here or in Saint and you know he’s a master.

This is a must see when it plays this weekend at Scary Movies-and that goes for anyone who wants a great thriller and not a horror film.
Posted by Steve Kopian at October 30, 2014