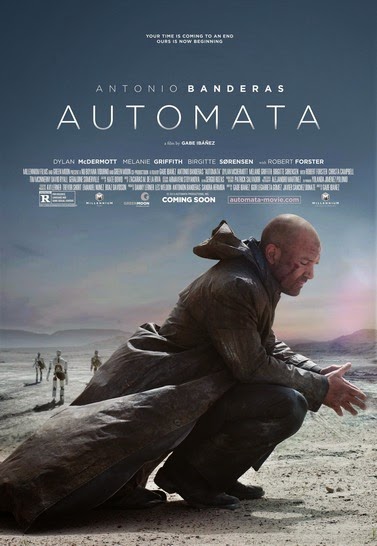 Protocol 1: Robots are not to hurt any living thing
Protocol 2: No robot is to alter another robot

The earth is dying. The rivers have dried up. Whats left of mankind lives in walled cities designed to keep the riff raff out. In order to help mankind robots called pilgrims have been created. Life however isn't all peachy. People are miserable. Antonio Banderas plays is an insurance investigator specializing in claims relating to robots. He gets involved in the case of a robot who was shot while fixing himself (a violation of the protocols) and smuggling parts. Banderas wants no part of it and wants a transfer to the ocean but his boss wants him on the job and this case. Of course it causes him no end of trouble...

When the film opened it seemed at first to be a weak I, Robot meets Bladerunner on a budget. What it quickly turned into was a nifty little science fiction film that is infinitely better than the Will Smith film and perhaps, should it find the right audience become  a classic.

I'm not going to lie here and say that the film mines lots of new territory here, it doesn't. We've been here pondering what it means to be alive, what it means to be the last of you species and what is humanity. The themes have been explored elsewhere to varying degrees of success.What's different here is that the themes and ideas are wrapped up in a neat little package that not only is a very good Euro-tinged thriller but also clever enough to lay things out in such away that you don't mind pondering them again. Say what you will sometime riffing on a well known theme can result in new insight and shading you never considered before.

Watching the film at midnight several weeks back I thought I was going to watch the film for a bit and then turn it off and file a review by rote. Ten minutes into the film I knew that wasn't possible and my planned early bedtime was getting pushed back, I had to see how this came out and I had to see it then. This is a surprisingly great film that has me pondering all that it has rattling around in it's wonderfully bleak confines.

If I had to point to two things about why the film works so well I would say first is the cast which plays it perfectly. They are clearly into the film and what it's doing and they sell the story perfectly. Frankly when I saw the poster for the film I was thinking it was a paycheck job for Banderas, but having seen it I know why he took it. Hell I would have taken it if I was offered it.

The other reason is the direction. Credit Gabe Ibanez with not taking the road most traveled. I love that the film has weight, that things feel real and that there is a darkness in tone that never lets up (this really looks to be the end of Man). This is not a happy film, and it plays that way right on to the end. God bless Ibanez for that.

Trust me when I say this film is something special. I really do think that in five years or so that regardless of what the other reviews say now, that this film is going to be looked at as a  classic of the genre. I doubt it will change the world like Bladerunner, but it will change people's minds and get them thinking and hang with them long after the end credits roll. No, it's not perfect but yes it is that good.

The film opens Friday in theaters and on VOD. Please give it a shot.
Posted by Steve Kopian at October 06, 2014