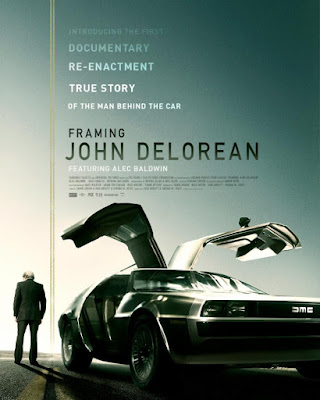 FRAMING JOHN DELOREAN is a documentary which mixes, archival footage, with talking heads and recreations (featuring Alec Baldwin as John DeLorean) to tell of the life and fall of the car manufacturer. Because the selling point seems to be the Alec Baldwin recreations it was a film that many people in the press corps were looking at a little oddly. The funny thing is that by doing what it does it ends up being incredibly insightful, entertaining and pretty damn good.

While the film tells the story of DeLorean from his early days to his fall from grace and beyond the film takes things in several different directions that make the film something special. First and foremost while the film casts Baldwin as the auto maker it doesn’t just have him walk through moments of his life, instead we get behind the scenes material, possibly even more than actual recreations, where we watch Baldwin, actors and filmmakers discuss the man, his life and how best to portray it on the screen. That may sound like a misstep but it yields unexpected gold since the discussions add insight to the man since their pondering force us to think about what we are seeing. Moments where Baldwin and others relate things in DeLorean’s life to their own, say Baldwin having a much younger wife, make things slip into crystal clarity. I don’t think it is a move that will work in most other cases but here it is a perfect way to get into the head of the man at the center of the film.

The film’s approach to the talking heads is kind of brilliant. Instead of locking everyone down to typical documentary style interviews the directors let the interviewees go of script. Walls are broken down and there are often times, especially with DeLorean’s son, where it all hangs out and the emotion is not reigned in. Real feeling leaks out, as in how John’s says how the film should end. It beautifully puts us in the moment and at the table across from the people talking to us.

Another thing I love that the film does it interviews many of the writers and filmmakers who have tried to film DeLorean’s life previously. All identified with lines like “Writer of an Un produced DeLorean Film”, “Writer of another unproduced DeLorean Film” and “Writer of yet another…” the writers add color and explanation as to why the man is at the center of an obsession for many people. Their commentary makes us understand why so many people want to tell the story, and gives us shading that we would never get had the filmmakers simply left us to just see their view.

This is a really super film. While I could quibble that it’s a little too long, it breaking and reshaping of the documentary form has created a film unlike any that I’ve seen. It is an recommended look at a man and his time, putting him into a place beyond the guy who made the Back To The Future car.
Posted by Steve Kopian at May 01, 2019