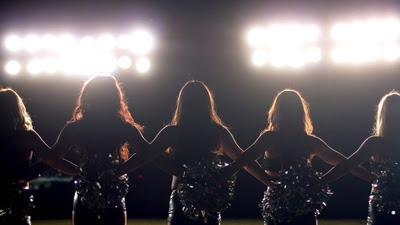 No matter who they are, their stories all sound suspiciously the same. From a young age, they loved dancing, eventually making their way to junior and varsity cheerleading squads in high school and college. Eager to turn their passion into careers, they tried out and joined the cheerleading squads for NFL teams. For a time, it’s a dream come true: the passion of performing, the joy of squad camaraderie, the thrill of city pride are intoxicating.

But slowly the grim economic realities set in. They’re expected to pay for their own makeup, hair, and nails whenever they make publicity appearances or have photoshoots. They’re fined if they’re slightly late for practice, a devastating blow considering their rehearsals are unpaid and they only make approximately $45 a week. The worst part? They don’t get paid until the end of the season, leaving them financially destitute for nine months of the year. When compared alongside the litany of other scandals rocking the NFL—the sex abuse allegations, the tax dodges for multi-billion dollar stadiums, the suppression of reports examining chronic traumatic encephalopathy among retired players—the plight of professional cheerleaders may seem a drop in the bucket. But it’s a drop nonetheless, one drowning the hundreds of highly skilled athletes exploited by the NFL on a weekly basis.

It’s this abuse that forms the core of Yu Gu’s A Woman’s Work: The NFL’s Cheerleader Problem, a film which follows a number of former and active cheerleaders who’ve brought class action lawsuits against the NFL for workplace exploitation. Key among these is Lacy T., an Oakland Raiders’ cheerleader whose 2013 lawsuit against her own team demanding compensation for withheld wages made national headlines. Her lawsuit was the straw that broke the camel’s back, and soon after her litigation began over a dozen other lawsuits were filed by NFL cheerleaders, some of them successful.

It’s an uplifting, inspirational story perfect for the #MeToo zeitgeist, so why does the film itself feel so underwhelming? Perhaps it’s the film’s inability to maintain a consistent tone, feeling like a commercial for the sport one moment and a soul-crushing expose the next. Or maybe it’s the lack of an overall structure as it veers from court procedural to biographical vignette to talking head testimonial with little rhyme or reason. Still, there are clumsier documentaries playing this year at Tribeca, and few on such an important topic.