ARTIFISHAL: THE ROAD TO EXTINCTION IS PAVED WITH GOOD INTENTIONS (2019) Tribeca 2019 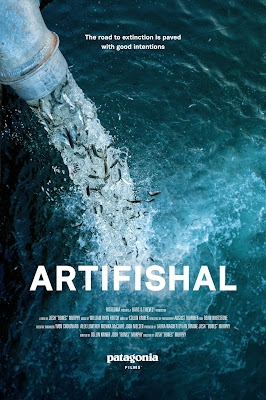 Portrait of the hatchery industry which is trying to mitigate the damage we have done by damming and altering our rivers. The idea if we breed the fish and return them to the wild we will be able to keep the fish levels high enough to fish. It isn't working as it should.

This is a damning look at ho the best intentions is wrecking the environment. The problems begin with the fish not growing up the way the should  and made worse that in many cases the fish being farmed are the wrong species for the locations. An accident in the Pacific North West release hundreds of thousands of Atlantic salmon into the ecosystem threatening a natural disaster.

While this is an important topic I found the presentation a little too preachy for my taste. I am not in any way saying what I was being told was wrong but I could have used a little less stick and a bit more carrot since I feel beaten up. Worse the film kind of faded from my mind thanks to being annoyed with the approach.

Reservations aside, its worth a shot