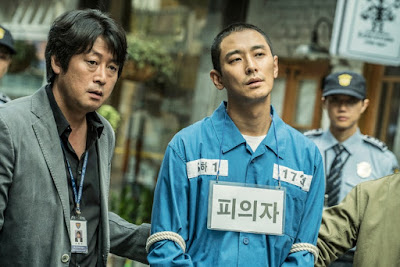 World weary Kim is told by his informant Kang that he had killed someone ten years earlier. However before he can pursue it Kang is arrested for the murder of his girlfriend. Months later Kang contacts Kim to say he was framed. If he will look into the frame he will tell him about the seven other people he killed. This sets Kim on a years long battle with a sociopath trying to scam the system and get free while dangling his misdeeds out there for all to see.

Based on a true story DARK FIGURE OF CRIME is one that will have you sitting on the edge of your seat. it is not an action packed crime thriller, rather it is a measured and compelling crime drama about a bad man playing games with a good man who won’t give up because he knows that justice must be done, that the families need closure and that the dead need to have their stories told. What makes this such a gripping film is the fact that DARK FIGURE OF CRIME doesn’t follow any expected paths. Unless you cheat and read a synopsis you are not going to guess how this goes.

Well-made and well-acted, DARK FIGURE is a wonderful film. In an age where so many true stories are tinkered with so they are bent to follow expected path it’s so nice to see one that unfolds in its own way. What makes this doubly a delight is that at a festival such as NYAFF where the unexpected is expected, the film still manages to surprise.