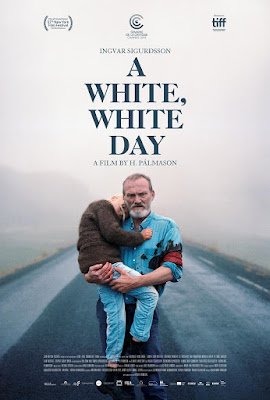 It begins with a hypnotic drive through the fog. We are following a car racing through the mist going somewhere at speed.  It doesn't make a curve and goes through the guardrail and down out of sight. Two years pass and we are introduced to police chief still mourning the death of his wife. Realizing that his wife may have had an affair with one of his officers things begin to spiral out of control.

Stop right there- this is not what you think. this is a film that is not going to do what you want or expect and you are just going to accept it. Director Hlynur Palmason is going to tell the story the way he wants to tell it which may not sit well with some people.

If you need an example about how Palmason tells the story consider the opening, or the five minute sequence which follows the passage of time showing the seasons change as people come and go at a home. Later on sequences go banana shaped as they don't play out as expected or people do things they don't normally in films. We are forced to think outside of the typical cinema box and get into a completely different head space. It is nothing radical, it is just enough to make us sit up and take notice and not let events wash over us. We must engage.

That last point is important. in a time when most people are making films that simply wash over us, Palmason's A WHITE WHITE DAY forces us to engage. It forces us to consider what we are seeing and weigh the events. It is wasn't a great film beyond that it would be enough. But as it stands the film is more than just an engaging thriller or drama or whatever you want to call it. It is brilliant storytelling of the highest order.

A WHITE, WHITE DAY will make its U.S. Theatrical Premiere on April 17 through FILM MOVEMENT's VIRTUAL CINEMA and participating theaters across the country. As with all virtual theatrical releases, tickets will cost $12 and exhibitors will receive 50% of all revenues. For more information go here
Posted by Steve Kopian at April 14, 2020