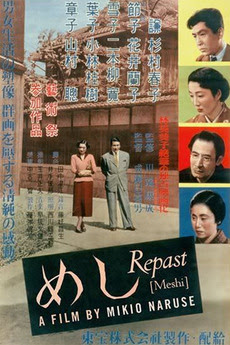 There’s a sequence early in Mikio Naruse’s Repast where two characters take a bus ride through the streets of Osaka for a tour. They marvel at the buildings and sheepishly giggle at the overeager tour guide who sings a traditional song when they pass a famous landmark. For the historically uninitiated, this scene might seem an out-of-place flourish of home-town boosterism. But those in the know realize its melancholy undercurrent: most of these buildings are probably less than five years old, having been recently rebuilt after the American bombing of the city in World War Two. Quasi-documentary city tours like this were not uncommon in Japanese films of the time—it was as if the Japanese film industry determined to witness the reconstruction of their country’s national image. This push towards modernity lies at the heart of Repast and other Japanese dramas of the era, many (particularly those of Naruse, Yuzo Kawashima, and Yasujirō Ozu) of which examined the alienation of the resurgent post-war middle class which frequently found itself unable to cope with the sudden evolution of urban life.

Repast is a particularly laconic bit of semi-tragic melodrama, examining the unfulfilling life of one such unfortunate, an Osakan housewife named Michiyo (Setsuko Hara). After moving away from her family in Tokyo to settle down with her salaryman husband Hatsunosuke (Ken Uehara) in Osaka, she discovered that married life wasn’t a fantasy but a prison sentence of ceaseless, Sisyphean toil around the house. After Hatsunosuke starts flirting with her runaway niece, an exasperated Michiyo flees the modern metropolitan sprawl of Osaka for the traditional wooden buildings of her family’s neighborhood in Tokyo where she reexamines her seemingly purposeless life. A conspicuously deglamorized Hara—one of the crown jewels of classical Japanese cinematic beauty—has never seemed more downtrodden; there are shots where it’s almost hard to recognize her. Naruse subtly underscores her plight with his intuitive understanding of the geography of traditional domesticity: a repeated set-up in the film sees Hatsunosuke lounging on a tatami in the foreground while Michiyo labors in the kitchen in the background.

Even so, Naruse was never Ozu’s stylistic equal, and without his contemporary’s hermetic environments much of the film’s drama feels flat. The unexpectedly happy ending where the couple reconciles doesn’t help, either. It feels like it belongs to a less despairing work of working class ennui.
Posted by Steve Kopian at April 14, 2020