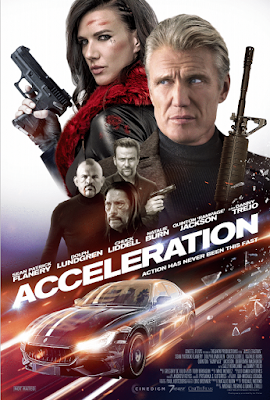 The simple plot has Rhona (an excellent Natalie Burn) having to complete 5 tasks in one night given to her by Dolph Lundgren. He kidnapped her son and he says he will kill him if she doesn't complete the tasks. Complicating things  is another set of bad guys with their own agenda.

The first thing you need to know- this is not high art. The second you need to know is this is really entertaining. I know the film isn't particularly loved at IMDB and elsewhere but that's okay. It was never meant to be the be all and end all. It's a popcorn film nothing more and the sort of thing you can fall into. This is exactly the sort of film that my Dad and I will stop to watch when we are channel surfing because it isn't trying to reinvent the wheel. Sure there are problems but the film moves fast so who cares?

Yes the plot is nothing to write home about but the film still delights and pulls us along.

Part of it is the actors who appear to be having fun. It was probably a paycheck job for many but they still give their all. Star Burn maybe a tad stiff  in the dramatic scenes but she kills it in the action. Considering many action stars like Chuck Norris or Jean Claude Van Damme were awkward when they started in the lead sh's in good company.

A bigger part of why the the film works is the often exotic nature- we go to places we don't usually see. Everyone doesn't speak English. There are some odd touches like one character watching WHITE ZOMBIE projected on a wall. This isn't like every other film.

The main reason this film works as well as it does is the action. The fights of all sorts are really good. There is more weight to them than in most films. They are not filmed in your typical low budget just shoot it this way and move on style. Everyone cared.

While the film gets lost a couple of times (say the Russian Roulette sequence going on much too long) mostly it moves along at a good clip thanks to the great action scenes. Maybe it is not a breathless race to the end but it is completely compelling in all the ways that matter.

Natalie Burn is listed as the producer and I understand why she did it, the film is a great show case for her action prowess. I love that she went out and made her on film to show off her own skills. I'd like to see her kick some more butts in another film.

ACCELERATION is available streaming
Posted by Steve Kopian at April 12, 2020