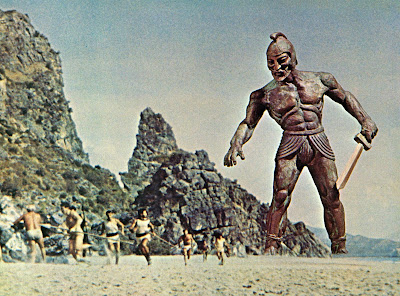 The first Ray Harryhausen stop-motion monster in Don Chaffey’s Jason and the Argonauts doesn’t show up for thirty-five minutes. When it does it’s pure, old school Hollywood magic: the towering Talos—metal defender of the Isle of Bronze—does battle with Hercules (Nigel Green) and his partner Hylas (John Cairney) after they desecrate the gods’ sanctum and steal a golden brooch pin. Soon Jason (Todd Armstrong) and the other Argonauts join battle, hacking at its feet before fleeing to their ship the Argo. Before they can escape the bay, Talos reaches down, picks the ship up, and smashes it upon the waters. Finally Jason solves the riddle of defeating Talos with the aid of the goddess Hera (Honor Blackman), tearing off a plug on its heel and draining it of life-giving ichor. Talos moans, cracks, and collapses.

It’s one of the finest sequences Harryhausen ever animated and it, along with the legendary climax where the surviving Argonauts fight an armed guard of reanimated skeletons, is almost always mentioned when his movies are referenced.

Indeed, the Harryhausen sequences always loom larger than the films that inspire them; even people who’ve never heard of this one know the skeleton fight scene. But unlike many other early special effects extravaganzas—including many made by Harryhausen himself—it matters little that we have to wait over half an hour to see our first animated monster, as the rest of the film is just as engaging a fantasy adventure without them.

Largely shot on location in Italy and featuring truly dazzling sets, costumes, and production design, the film is visually resplendent from its first scene. The brisk script by Beverley Cross and Jan Read keep the story from getting bogged down by tedious exposition or dreary dialogue, and the actors all throw themselves into their roles with gusto. (Green in particular has a blast playing Hercules—every time he’s onscreen it’s impossible to look away.) But what puts it over the top is a strange sense of melancholy pervading the machismo heroics. This Hellenistic world is clearly on its last legs: the temples are all abandoned, the cities are largely reduced to ruins, mankind is turning from its pagan gods (just in time for Abrahamic monotheism, natch). This is the bittersweet story of the transition from one age to another. The giant monsters are the sugar to help the medicine go down. 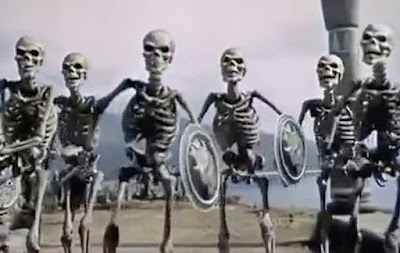