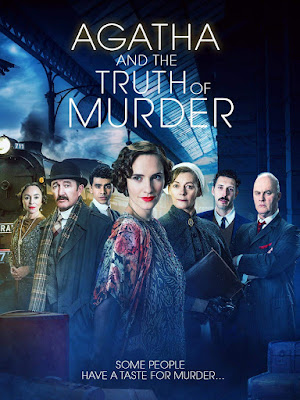 Based on the actual disappearance of Agatha Christie in 1926, AGATHA NA THE TRUTH OF MURDER suppose that Christie was suffering writer's block. Unable to write she tries a variety of things including making a golf course. However what grabs her is the visit of a nurse. The woman wants Christie to help solve the killing of her friend six years earlier. She was bludgeoned on a train and took four days to die.

I was expecting something similar to the typical BBC/PBS murder mystery and instead I found it to be something else entirely. A nifty blending of drama and  murder mystery into something truly special. I say this because while much of the film is focused on the typical Christie trope of bringing all the suspects together, pretty much the first third deals with Christie, her writer's block and her failing marriage to her husband. Until we are in the final hour we only get a taste of the murder and the mystery, just enough to make us want  more.

I really liked this film a great deal and highly recommended it to anyone stuck inside.