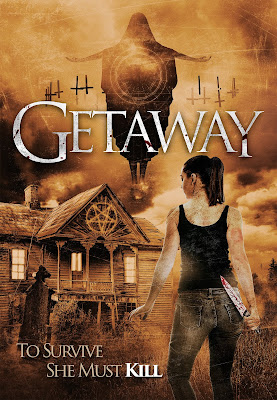 Disappointingly bland thriller has a great cast, a good script and a wonderful look but somehow it fails to generate many thrills.

GETAWAY has three friends going on a road trip and running into a weird group of guys (the promo material says its a cult but I'm not so sure) who kidnap them. Will they get away?

Surprising us in pretty much every way GETAWAY is actually pretty good. I may bitch that the film disappoints but that is only because a film that does almost everything this right should be scarier. Seriously everything here is really good and way better than the vast majority of similar films which often suffer with poor acting, no passion behind the camera and bland visuals. Here everyone not only acts but sells what they are doing, there is a love and thought in how the film is put together and cinematographer Erin Naifeh (who also produced) proves that she is a force to be reckoned with. (I wouldwant her to shoot one of my films).

I this the problem here is the basic plot. While the script is well written, outside of a couple of WTF bits typical in films like this (the police are baffled by disappearances but the kidnappers keep going),  the basic plot line doesn't do anything different. Yea, we get a lots of small details that set the film apart from the rest, but the basic flow is boiler plate. We have been here before.

Don't get me wrong, I like the film, but I really wanted to LOVE the film.

Hitting home video Tuesday April 14, GETAWAY is worth a look.
Posted by Steve Kopian at April 10, 2020