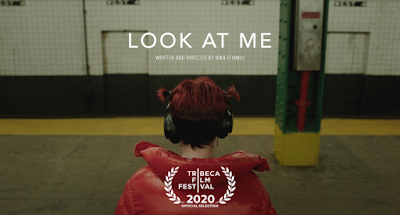 Pointed film about the disconnect of society through the experience of a young man in trouble.

The film begins when a young woman on a subway platform sees a man sitting on the stairs, obviously in trouble. She calls 911 and  is told to stay with him. Instead she gets on the subway and leaves. The  film then goes back in time to show us what brought the man to that point.

Being a New Yorker I am well aware of the isolation that most people practice. Headphones and cellphones are the way most people isolate themselves with most people not wanting to get involved. Not wanting to engage with anyone because they are frightened where it could lead. It is a standard survival mode for the city and sadly modern society. LOOK AT ME pointedly shows us a world where everyone is firmly in their own world.

This expression of what the city can feel like at times this film is dead on . The city that never sleeps can frequently  seem to exclude everyone, especially in the subway. We are all there but no one wants to be there with anyone around them, even though they are. We all want to be in our own pretend safe bubbles lest the monsters get us.

As good as this portrait of isolation is the film doesn't wholly ring true. Not all New Yorkers are distant. While people try not to engage the inevitably will- even for a moment. Someone stumbling down a subway platform will break the protective wall, and cops running will most certainly not be met with the dead eye response of the people on the 4th Street platform. Nothing like a circus or a potential threat to make people engage with the world even slightly

To be honest while I like the film this is more a polemic than a drama. This is a film that goes out of its way to show isolation to a kind of ridiculous degree. Honestly I was chuckling at the elevator full of people trying not to engage with anyone. No one knew anyone? Hell, no one on the subway platform knew any one or even on the subway? Not likely with the number of people we see. The truth is the city isn't this cold despite it feeling like it at times. If you have an elevator full of people in the subway people do engage. Unless it's a mostly empty subway car full of single riders there is some form of interaction.

As a polemic and statement about how isolation in the city can feel this is very good. As a drama and 100% accurate portrait of life in NYC it's  less so.
Posted by Steve Kopian at April 10, 2020